THE HINDU 15 DECEMBER 2011
An Indian veteran recalls his Antarctic experiences
R. PRASAD
Dr. Ravindra can never forget his experience of surviving a seven-day blizzard with only a tent as shelter. 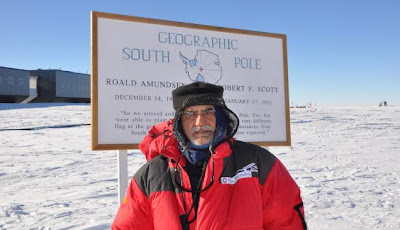 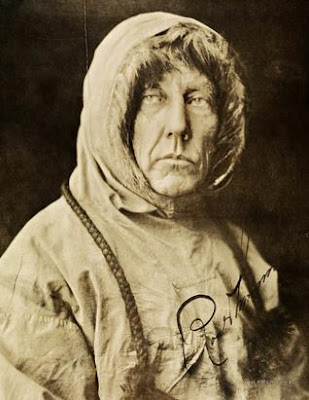 This day (December 14) 100 years ago, Norwegian Roald Amundsen became the first explorer to reach the geographical South Pole — the southernmost tip of the Earth. If his ambition to be the first man to ever set foot on the North Pole was scorched by Robert Peary in 1909, he immortalised himself by being the first to arrive at the South Pole.
“So we arrived and were able to plant our flag at the geographical South Pole. God be thanked!” wrote Amundsen in his diary soon after reaching the Pole.
The British team led by Robert Scott managed to arrive at the South Pole only on January 17, 1912, 33 days after Amundsen had hoisted the Norwegian flag.
DISAPPOINTMENT
Scott's entry in the diary reveals his great disappointment. “The worst has happened… All the daydreams must go…Great God! This is an awful place and terrible enough for us to have laboured to it without the reward of priority,” the diary entry reads.
While Amundsen and his men safely and victoriously returned to civilisation, Scott and his team, caught in a terrible blizzard — which lasted for five days — were unable to reach even their base camp.
“There has been nothing to eat for the past three days. Now, I am not even able to write. End is not far. For God's sake, take care of our families.” This was Scott's diary entry on March 29, 1912. Their bodies were discovered eight months later.
The reason why Amundsen reached the Pole earlier than Scott is not difficult to figure out. Their goal was the same, but their priorities were vastly different.
Amundsen was focussed, planned meticulously, and was fully geared for the challenge. Unlike Scott, the Norwegian had a team that had no scientists. Instead there were two expert dog-handlers — Helmer Hanssen and Sverre hassel, and one skiing expert (Olav Bjaaland) in his team.
He did not indulge in any scientific work and wasted no time taking a detour to studying Antarctic animals or collecting samples.
SPECIAL DOGS
Even the choice of animals was strikingly different. Scott took more ponies than dogs, Amundsen had special dogs to pull the sledges.
Worse, Scott sent his dog teams back to the base camps and men pulled their heavy sledges. If Amundsen had no hesitation killing the dogs that had weakened, and eat their meat, Scott believed that using man-harnesses was less cruel than using dogs!
The Norwegians used hermetically sealed cans to store fuel. The British team used washers, which failed in extreme cold. Similarly, Scott's motor sledges failed in the weather.
Even the choice of clothing was different. Living with the Inuits in the Arctic, the Norwegian learnt a great deal on how to handle all kinds of contingencies.
He had seen them eat meat diet. Unaware to themselves, the fresh seal and penguin meat that they ate helped keep vitamin C deficiency at bay.
In the end, the focus and clear priorities meant that Amundsen reached the coveted place weeks before the British team.
By Sudhir Khandelwal at December 17, 2011 2 comments: