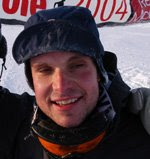 Having gone blind in the space of two weeks in 1998 Mark rapidly learned how to adapt to changing circumstances. Now, he motivates employees all over the world, pursues research into resilience, creativity and innovation as well as testing the theory by competing in diverse events. Mark’s story is incredible and reaffirms our faith that there is a power that resides within us all to take control of our lives.
One major highlight of the Amundsen Omega 3 South Pole Race 2008 was Mark Pollock completing the race skiing all the way to the South Pole like other competitors. Mark’s story is truly inspiring, he is blind in his both the eyes. He went blind in 1998 due to retinal detachment. He was then already an international rower and a business student. “The shock of going blind was almost unbearable. One moment I was on the crest of a wave with everything going my way, the next I went blind and my life changed forever. I thought my life was over.” 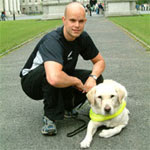 However, loss of vision failed to dim his spirits. He had to dig deep to redefine his life and ambition. Choice was to give up and lead a retired or semi-retired life, or to move on. He decided to take an even more arduous and hard journey for himself. He chose to become an adventure sportsperson. He quickly learnt how to adapt to the changing circumstances. Since going blind, Mark has won medals rowing for Northern Ireland at the 2002 Commonwealth Games, completed six marathons in one week in China’s Gobi Desert, raced in the world’s coldest marathon at the North Pole, kayaked across the Irish Sea, completed Ironman Switzerland (3.8 km swim, 180 bike followed by a marathon) and was the first blind person to complete the lowest and highest marathons in the world – The Dead Sea Ultra in Jordan followed by the Tenzing-Hillary Everest Marathon from Everest Base Camp in Nepal.
For the summer season of Antarctica beginning October, 2008, Mark teamed up, South Pole Flag Team, with Inge Solheim and Simon O’Donnell to participate and compete in the South Pole Race 2008 which has just concluded last month. See the earlier post on this blog. He was to race to the South Pole over 800 km in the world’s harshest environment.

“We will man-haul 90 kg sledges (pulks) up to 16 hours each day for 45 days. We will be sleep deprived, hungry, cold and tired. We will risk Polar shock and wonder why we are there at all”. That’s what Mark said before his departure for Antarctica.
What on earth possesses such people? It is this - the common purpose - that is the reason for the adventure. The team and the bonds that develop between them are the answer to: “What on earth possesses you?” This is what inspires adventurers to take on the challenge in the wildest extremes of the most formidable and coldest white desert of Antarctica bearing biting cold, extremes of sun-burns, sleep deprivation, dehydration and exhaustion.
The South Pole Race 2008 started on the 4th January with six teams. Mark along with his team-mates in the South Pole Flag had carried with them a flag with photographs of well-wishers, friends, and family members to hoist on the South Pole. 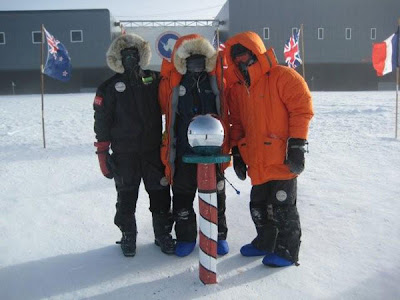 In spite of harsh terrain and sever climatic conditions, South Pole Flag team performed brilliantly, skiing, trudging or clambering 12 hours or more each day. On many occasions, they faced deteriorating weather conditions, poor visibility, contrast, winds, spindrift and extreme cold, temperature dropping to -46C with windchill. After nearly 1000 km and over 21 days of hard work, suffering and pain, Mark, Inge, and Simon arrived at the South Pole finishing 5th.
For more details and audio and video: www.southpoleflag.com and www.markpollock.com
By Sudhir Khandelwal at February 21, 2009

Wow Sudhir, Thank you so much for sharing. I didnt know about this feat.
They are truly great, it is we who are handicapped, for we depend on our senses. They have overcome that dependence.
Our salutes !!

Hi Mampi; great people have not allowed their handicaps to disable them. They not only lead normal lives, they put 'normal' people like us to shame by their spirit and achievements. That is why, perhaps, we hate their guts.

should get inspired for doing better

Hi, Anonymous! yes, we should get inspired. Intellectually we think that way, but do not accept it emotionally. We humans, like animals, do not like competition for whatever resources are available. That is why marginalized people continue to suffer.