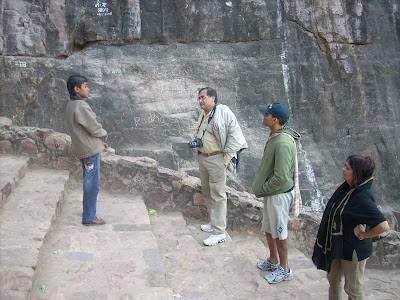 He told that the word, Ranthambore, is made from 3 peaks which are seen here: Ran, Tham, and Bore. What we learnt from him was that the fort was more than 1000 years old and many dynasties ruled over it depending upon who was ruling Delhi at that time. But most of the time, it remained with the local kings and was their favourite ground for tiger hunting. But some of them were great conservationists, and laid down rules for conserving the nature. He took us to all the three temple seen during visit to the forest, one of these was an old Jain temple. Whenever, out attention wavered, he would lose no time in asking us to listen to him. To make his narrative interesting, he also told us what VIPs had visited this fort and what movies were shot there. He aimed to study at least till graduation and get a job in the secretariat. His father, though with limited means, was also keen that his two children should study. That the family did not have an idiot box at home was proof that he was serious.
Our guide took us to all the important sites and we returned very satified. We thanked him and wished him well in his life.
By Sudhir Khandelwal at January 07, 2010

It's real interesting post on visit of Rathambore Fort. I wish to know more from you as regards to the history of this place. How to reach there and where to stay?
Mangesh Nabar

Thanks Sudhir. I too should take a trip there.

Hi, Manna; I did not wish to bore you all with the historical facts of the fort; these are all available at the Wikipedia or some such sites. Many trains running between Mumbai and Delhi stop at Sawai Madhopur from where Ranthambore is just 11 km away. There are many hotels in town from very basic to luxury ones. RTDC too has two hotels there, both decent ones.

Dear Manish,do visit Ranthambore, it is interesting; you may combine it with a trip to other cities of Rajasthan

Great. When I go to Ranthambore, I would want to meet that child.

Hi, Mampi; I am sure he will be there. Do convey him our best wishes.

I had the opportunity to explore Ranthambore this Jan. I agree its breathtakingly beautiful. Co-incidentally, we not only saw a plethora or birds, leopard but also a TIGER! It was the 1stday of my 1st safari ever. I swear I got hooked to the beauty of jungle. I would love to see Kruger Park, SA some day!

Hi, best wishes for your plans for Kruger Park; I hope it comes soon.