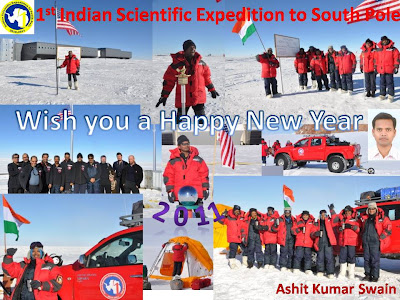 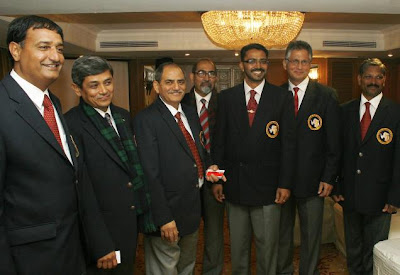 The Hindu Rasik Ravindra, Director, National Centre for Antarctic and Ocean Research (third left) along with team members of the first Indian Scientific Expedition. Photo: Shiv Kumar Pushpakar
It was not the bone-chilling minus 54 degrees Celsius, the difficult terrain or even the cold gusts blowing at 150 km/hour, but lighting a stove and cooking that posed the biggest challenge to the eight-member team of India’s maiden expedition to the South Pole.

Speaking about his experiences during the expedition, Mr. Ravindra said: “The toughest challenge was to cook, as in temperatures as low as minus 50 degrees Celsius it was difficult to light the stove.”

“We were carrying ready-to-eat meals with us but we had to put them in boiling water for cooking, and boiling water in this temperature was tough,” the 62-year-old Ravindra said.

The team said there were some depressing moments during the expedition but their determination and team spirit carried them through successfully.

“When we started, we were worried about the low temperature, high altitude and shortage of oxygen at that altitude. Many times our vehicles developed some problems, we faced a lot of problem melting ice into water and cooking,” said Pradip Malhotra, expedition doctor.

The team, consisting of a geologist, glaciologist, geophysicist and a meteorologist as well as vehicle engineers, had left Maitri, India’s second permanent research station on the Antarctica, on Nov 13.

“It was a gratifying experience and a lifetime opportunity. Once you reach there, you will realise the importance of basic things like fire, water and warmth. Despite making so much advancement in technology, you still have to depend on nature so much,” said M. Javed Beg, in-charge of logistics during the expedition.

The expedition travelled on four specialised Arctic trucks and each of these vehicles, besides its human baggage, carried special gears, emergency medical kit, frozen food, and navigational and scientific instruments.

The scientists conducted five experiments during the journey.
By Sudhir Khandelwal at January 12, 2011

Congratulations. You all have made India proud. I think yopu are tyhe first team from India to reach the SP. May your expedition be the begining of many more such expeditions &may the Indian flag always keep flying there.
George Jacob. Pune

Congratulations on reaching the Pole! I have a question. Are there any pictures, available on the net, of the Bharati station construction site? Or is there a webcam or any other way to have a look how the construction is going on?

I am not sure if any picture of constructions at Bharati are available on net. However, you may try the website of National Centre for Antarctic and Ocean Research: http://ncaor.nic.in/