CENTENARIAN Fauza Singh does it once again : with a marathan

(Pictures and text from the Toronto Star) 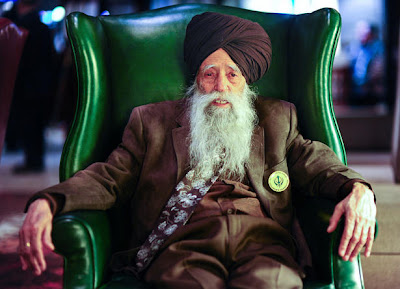 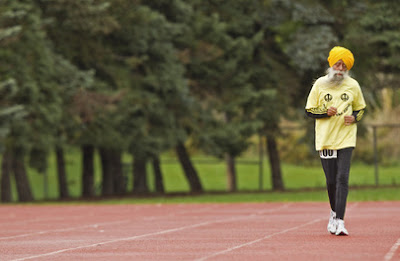 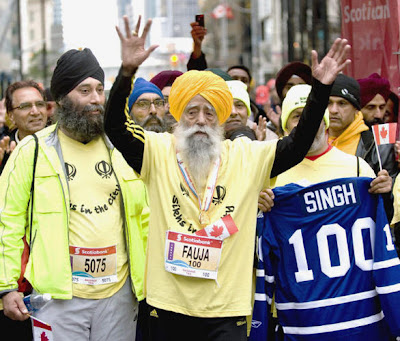 TORONTO—Fauja Singh secured a spot in the Guinness Book of World Records on Sunday at the Scotiabank Toronto Waterfront Marathon. The 100-year-old accomplished an amazing feat, becoming the oldest person ever to complete a full-distance 42-kilometre marathon. It took Singh over eight hours to cross the finish line — more than six hours after Kenya’s Kenneth Mungara won the event for the fourth straight year — and he was the last competitor to complete the course. But his time wasn’t nearly remarkable as the accomplishment itself. “Beating his original prediction, he’s overjoyed,” said coach and translator Harmander Singh. “Earlier, just before we came around the (final) corner, he said, ‘Achieving this will be like getting married again.’ “He’s absolutely overjoyed, he’s achieved his life-long wish.” Although event workers dismantled the barricades along the finish line and took down sponsor banners even as Singh made his way up the final few hundred metres of the race, a throng of media, family, friends and supporters were there when Singh made marathon history. And Singh, who only speaks Punjabi, also surprised himself. Through his interpreter, he said he had set a goal of finishing the race in about nine hours. “He said he achieved this through the help of God but even God must be getting fed up of helping him,” Harmander Singh said, drawing chuckles from assembled media after the race. Sunday’s run was Fauja Singh’s eighth marathon — he ran his first at the tender age of 89 — and wasn’t the first time he set a record. In the 2003 Toronto event, he set the mark in the 90-plus category, finishing the race in five hours 40 minutes and one second. And on Thursday in Toronto, Singh — whose first name means soldier — broke world records for runners older than 100 in eight different distances ranging from 100 metres to 5,000 metres. Singh, a five-foot-eight, 115-pound British citizen and vegetarian, looked tired and spent following the race and organizers gingerly assisted him to the post-event news conference. After receiving gentle massages to his legs and calf muscles as well as cups of water from members of his entourage, Singh leaned back on a couch and spoke little to start the news conference. But a short time into it, he began looking remarkably relaxed and fresh with his hands clasped behind his head. Then, he abruptly sat up straight and with a smile, motioned for the microphone, obviously getting his second wind.
“He says he’s recovered now so he’s going to talk,” his translator said, again drawing laughter.
Affectionately dubbed the Turbaned Tornado, Singh began running roughly 20 years ago after losing his wife and child. The five-foot-eight centenarian said he’s happy to see more minorities taking part in such marathon events and is hopeful his next project will be participating in the torch relay for the 2012 London Summer Games.
Singh carried the torch during the relay for the 2004 Athens Games.
Race director Alan Brookes struggled to find the right words to describe Singh’s remarkable accomplishment. “I’m speechless,” he said. “Fauja Singh is a remarkable human being.”
A 100-year-old man began Thursday with a sprint and ended with eight world records.
Fauja Singh ran through eight track events in succession at Birchmount Stadium in Scarborough as part of a charity event, Sikhs in the City.
Running — and smashing records — gave Singh some focus following the death of his wife and son. He became suicidal after watching a piece of sheet metal decapitate his son. Then he moved to England to be near his other son.
And then he just felt like running and setting records.
“I am but a simple man,” Singh the competitor, a Sikh with a long white beard who only speaks Punjabi, said in a translated statement. “I give it my best shot and it happens that the results are better than others.”
He’s already set three records for men over 90 — one for 10,000 metres, which he completed in 64 minutes in the Lahore Marathon in 2005; and two in Toronto, for a half-marathon in 2004 (2 hours 29 minutes 59 seconds) and a full marathon in 2003 (5 hours 40 minutes 1 second).
“I always wanted to be the oldest marathon runner and said to myself that if an opportunity presented itself, I will not turn it down,” said Singh.
He chose Toronto because it is where he had his best showings before. Plus, the people “seem more accommodating of other cultures than some other parts of the world where the Sikh appearance is wrongly prejudged.”
Singh wants to raise money for local charities, including Guru Gobind Singh Children’s Foundation, which is run by children and youth to help other kids meet basic needs.
But still. 100.
“In the Punjabi language, there is no such word as impossible,” said Singh the trainer.
At an age where having a healthy mind is itself a feat of strength, Singh the competitor is in remarkable — borderline miraculous — physical shape.
His trainer points to a bone density test done last year when the runner was 99. Singh’s left leg was found to have a density of a 35-year-old; his right leg had that of a 25-year-old.
Times to beat
By Sudhir Khandelwal at October 18, 2011