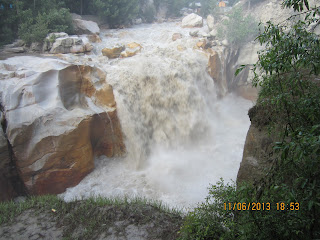 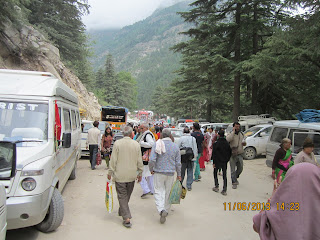 We were just 3 km short of Gangotri, when we got stuck in traffic jam. There were so many vehicles waiting to go in the town, and equal number of vehicles trying to get out, that there was complete chaos. The vehicles were so jam packed that none on either side could move. Besides the frustration of being stuck, when I was just waiting to leave the cramped bus with rickety seats, I was also experiencing hunger cramps, having had just two cups of tea since morning. It was getting to be 2 pm, with no letting up in jam being in sight. I had no choice but to walk the next stretch of my journey carrying my own backpack. Once I got near Gangotri town, the signals appeared on the mobile, and I informed Pandit Manoj Jib of my arrival, who immediately came to receive me and escort me to my guest house. The Gangotri town looked so different from what I had seen 18 years ago. So many guest houses, shops, and eating joints had sprung everywhere. Most of the guest houses were packed to capacity. There were serpentine queues to have darshan at the temple. Previously one could go to Gaumukh and Tapovan freely without requiring any permit. But with Gaumukh glacier receding at an alarming rate, the number of visitors and trekkers has been restricted to 150 only. The number of ponies has also been limited to 15. It is said that earlier the entire stretch of 4 km between Bhojwasa and Gaumukh was littered with tea and food stalls, with trash reaching the mouth of the glacier. During our earlier visit, we had trekked from Gangotri to Tapovan with a night halt at Bhojwasa. Hence this time I was not very keen for any kind of trek. I had planned to leave Gangotri on the morning of 14 June, but with public transport being limited, and too many visitors and pilgrims, I decided to leave on early morning of 13th itself giving myself enough margin to spend one night at Uttarkashi, if needed. It had rained quite a bit on the night of 12th. Though it had stopped, the driver of the Commander jeep forewarned us rain and traffic jam on our way to Uttarkashi. He did not halt even for us to have some tea or snacks. We made good progress, but just 20 km short of Uttarkashi, we stopped due to massive landslide because of rains of previous night. People were there for as much as 8 hours. We also had to wait for 4 hours before road was cleared. After that I got connections to Delhi in quick succession to reach here on the morning of 14 July. I think I made to Delhi just on the nick of time, because from next day onwards, news started trickling in of the rains causing wide spread landslides and roadblocks. I am not writing anything about the death, destruction, and fury of massive water flow, since the media seem to have put its act together, by attracting attention of citizens and governments. Government scrambled to save lives of stranded people, but the real heroes have the defense personnel who have been relentlessly trying to save people’s lives, stranded in remote corners and recesses of mighty Himalayas. I shall like to end the post by quoting following lines from my post on Roop Kund: Going to mountains has always been a humbling experience for me. We are always talking about the fragile eco-system and environment, but when you see nature at close quarters, you realize the might of nature too. One feels so small and insignificant before the hurtling and gurgling rivers and huge waterfalls, and mighty and grand mountains. I always believe in and owe our existence to the benevolence of nature; and would dread its fury. Going to mountains is to express my reverence to the omnipotent nature.
By Sudhir Khandelwal at June 26, 2013

Great to see you back Sudhir. Thanks for sharing this.

The place is very close to my heart. Felt the sinking feeling. Going there next month.

Dear Dr. Sudhir,
I really welcome your post on your blog site after a very long time ! You have expressed your feelings after the Uttarakhand happenings. I look forward your further posts soon. Regards.
Mangesh Nabar

Thanks for coming back Sudheer.

I've always waited for your posts and loved them for the content.

This one, very close to my heart. Am going there next month.

Dear Manish, thank you; yes, the Himalayan landscape and the gurgling rivers, all these make uttarakhand a special place. Go there with all the humility.
Best wishes,

Thank you, Mannab; you always have been very supportive.

Sudhir as always your write ups are exhilarating and touching.
Veena

Sudhir, as always, YOUR write ups are exhilarating and touching
Veena

Veena, thanks for visiting. It has been painful to see what the Uttarakhand has gone through.