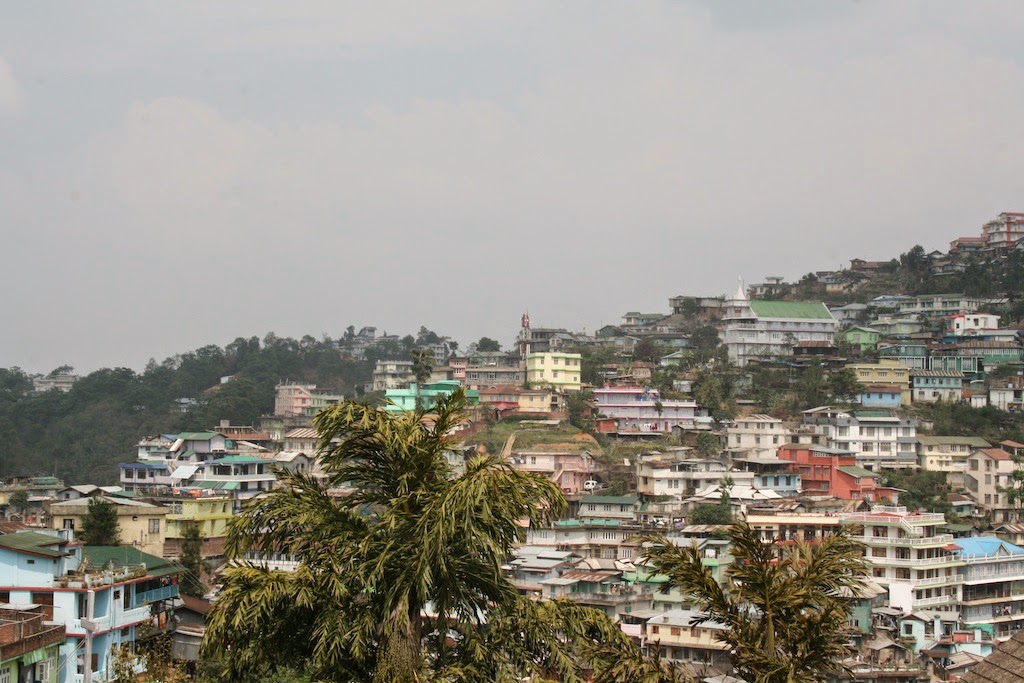 Visit to Nagaland happened just by chance. I had missed the chance to avail the LTC for the block year 2010-13 (it was to be availed by 31 December 2013), when I realized a number of staff members from the Department were applying to go to Srinagar for the same block. On enquiry, I was told that the block has been extended by a few months if you plan a visit to the hills. What a blind man would ask for; the summer vacation was round the corner, and I planned a visit to Nagaland. Srinagar also has breathtaking beauty, and you realize that with each visit to the valley. Last I visited Srinagar was in 2003, when after a visit to Leh, Vasuman and I descended on to the valley from Leh by road traversing Batalik, Kargil, Dras, and the treacherous Zozila pass. I had exclaimed that only after a visit to Srinagar and the surrounding areas, one realizes why we could not part with Kashmir. We chose Nagaland since we know so little about it, and it is shrouded by mystery that Nagas are man-eating, snake-eating tribe, and are at perpetual war with India. Nothing could be farther from truth, that we realized after visiting it. Moreover, a number of our faculty members have been to Nagaland as experts for training programme in the field of substance and alcohol abuse. They all have come back safe and sound, with all praise for the local people and landscape of Nagaland. 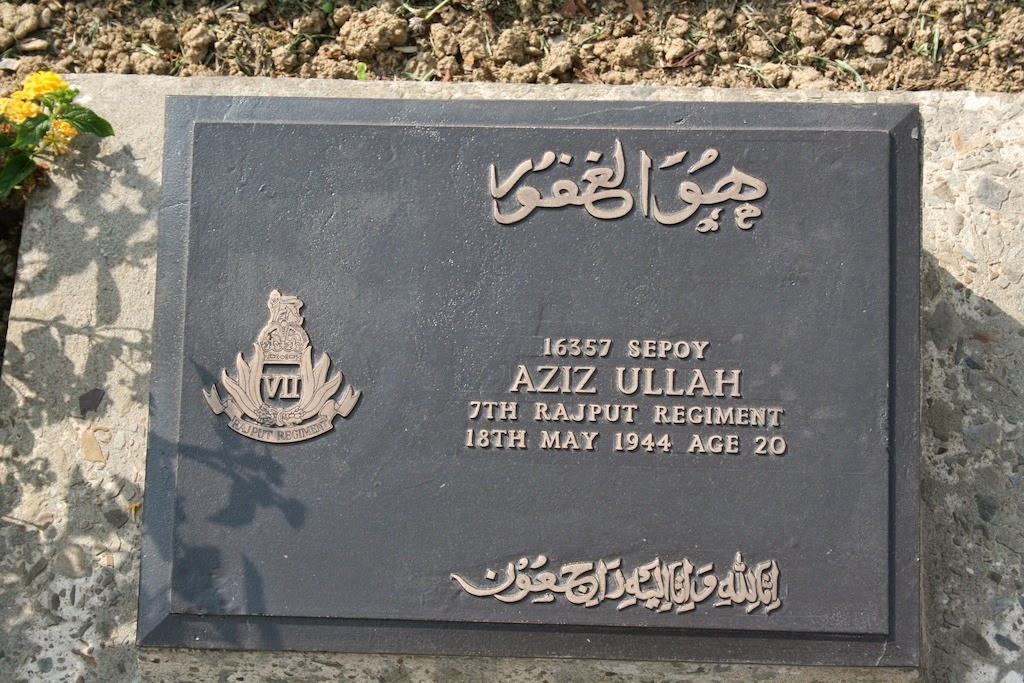 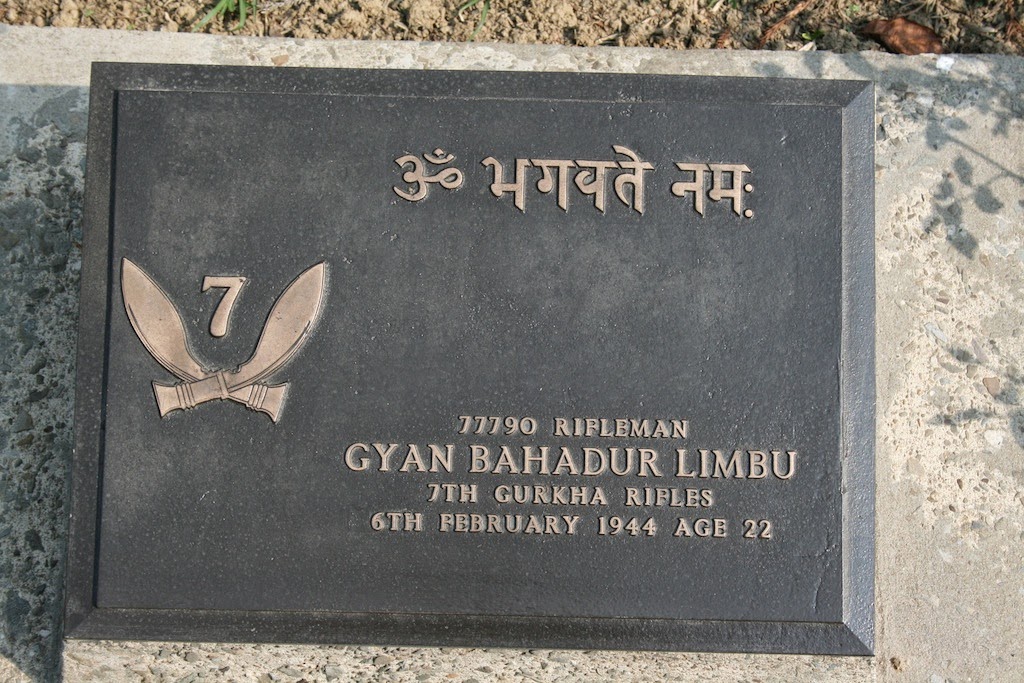 Atul and Ravindra gave me contact details of Dr Bernice to help me find a suitable accommodation in Kohima. She did not mind whenever I bothered her, and helped us find our accommodation, and to advise what should be our itinerary when we were in Kohima. Though the capital of Nagaland is Dimapur, which has Nagaland’s only airport, but for all practical purposes, Kohima is the main city for tourist purposes as well as commercial activities. The air route to Kohima is via Kolkata, where you change the flight for Dimapur. Our flights were on time, and when we reached Dimapur in afternoon, taxi was waiting to take us to Kohima, approx. 3 hours away. The road was in need of repair at many stretches, the route passed through some small villages, not very spectacular, but what was noticeable was that there was no visible garbage littered on either side of road. Nearer Kohima, the landscape became beautiful on a hilly drive with scores of banana trees in the wild. 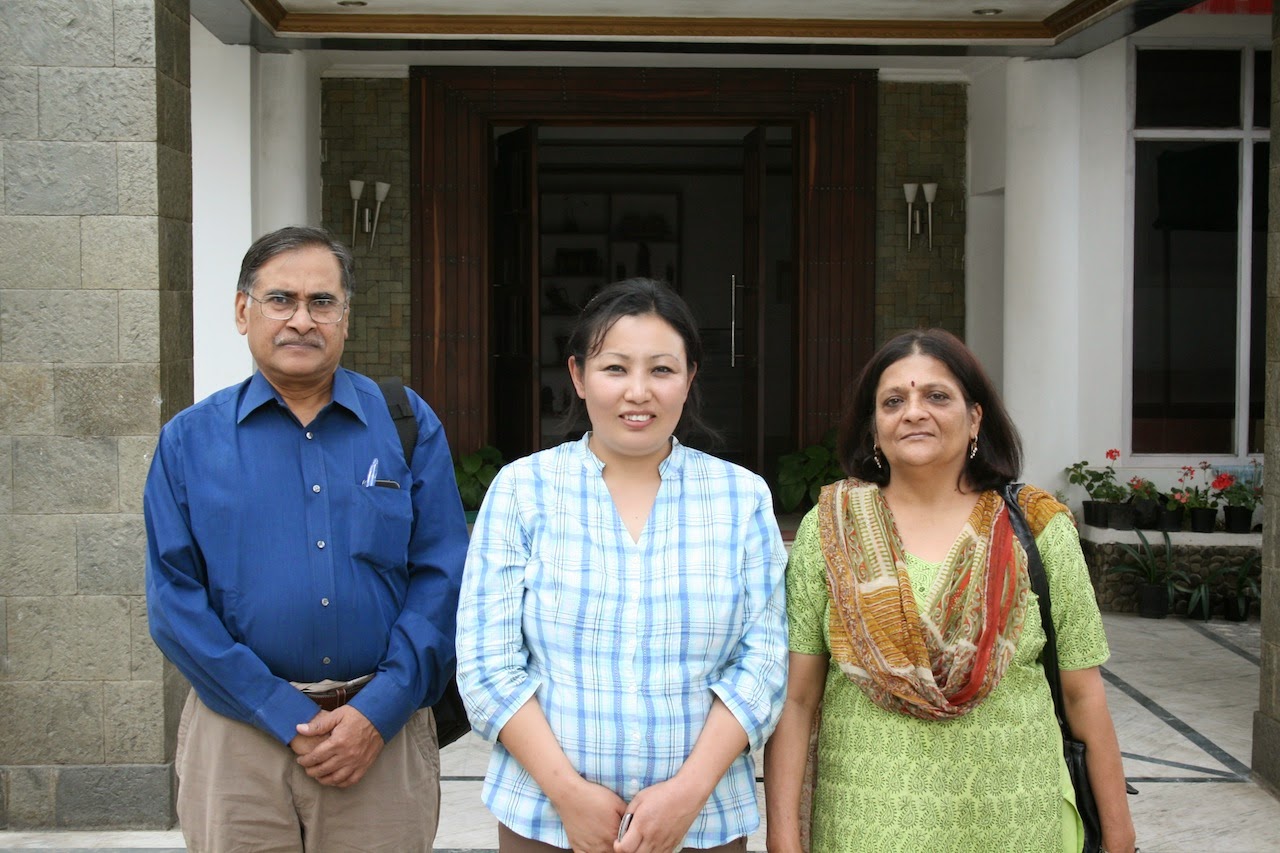 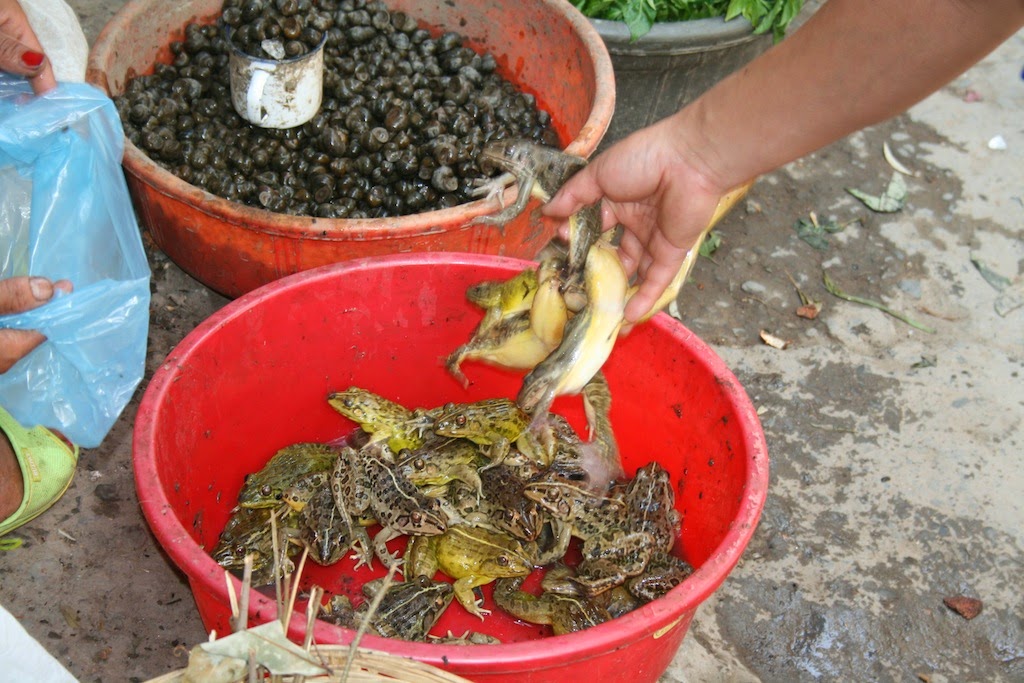 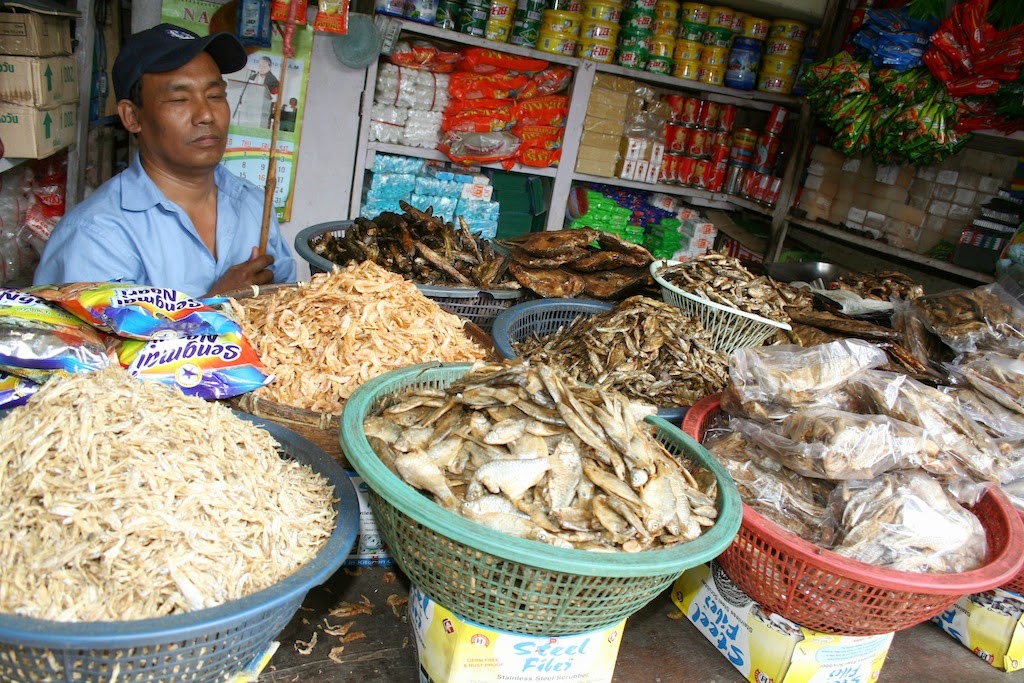 Kohima is steeped in history; one had vaguely remembered that the Japanese had tried to enter India through northeast during the WW-II, but we realized that the action took place right in the centre of Kohima town only after visiting the War Cemetery. All the soldiers of Indian Army who laid their lives defending Indian soil are remembered here, some of them as young as 17! Another interesting place to visit was the local market, where you get all the local produce and exotic food items! 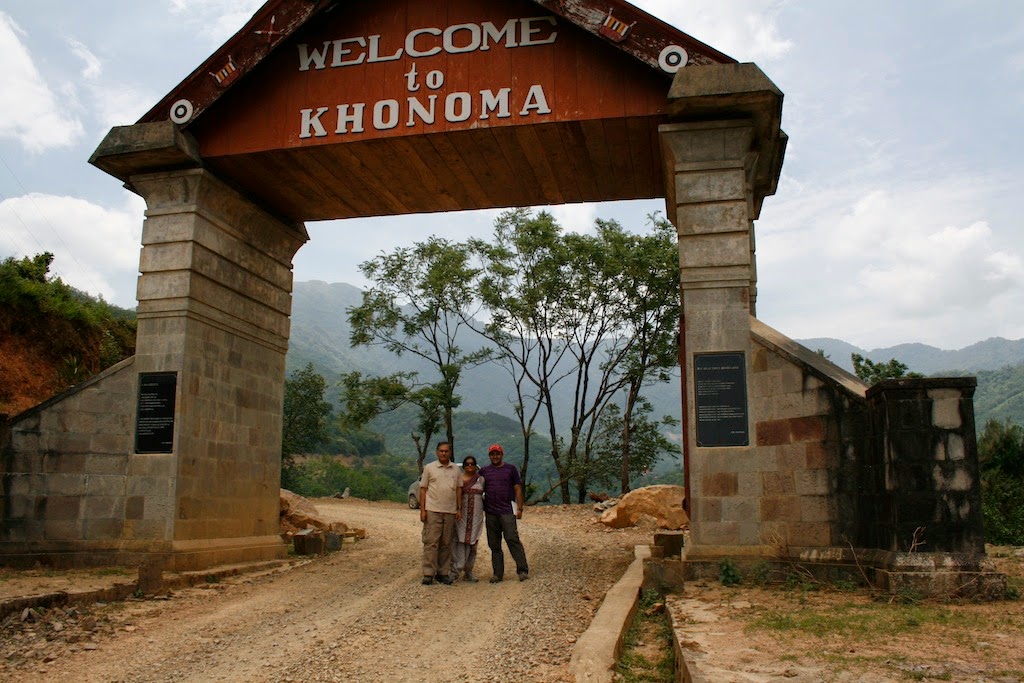 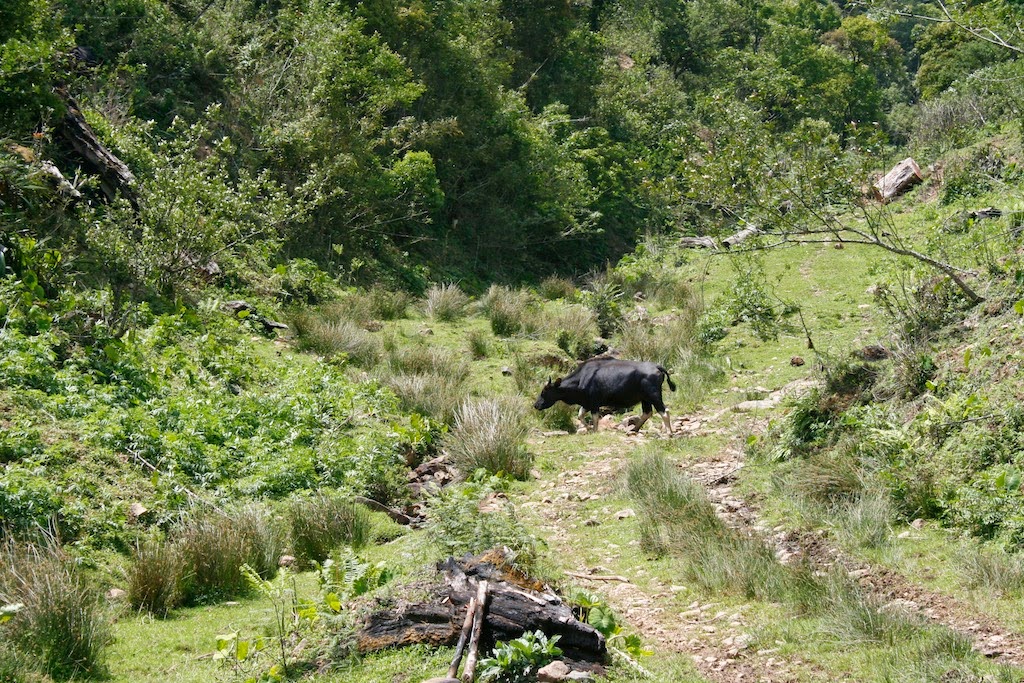 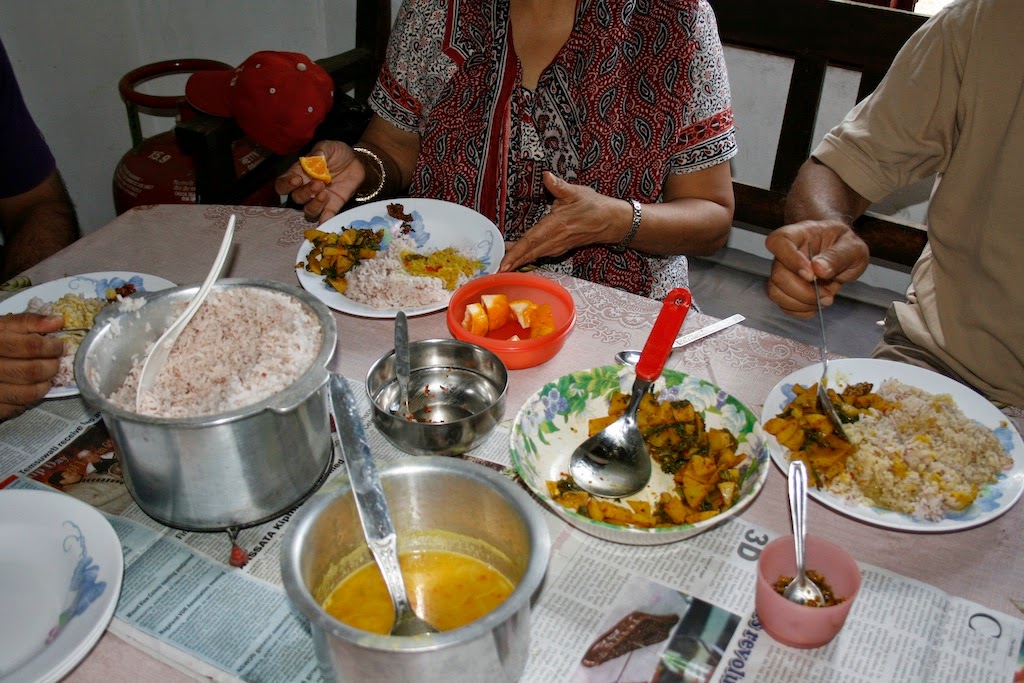 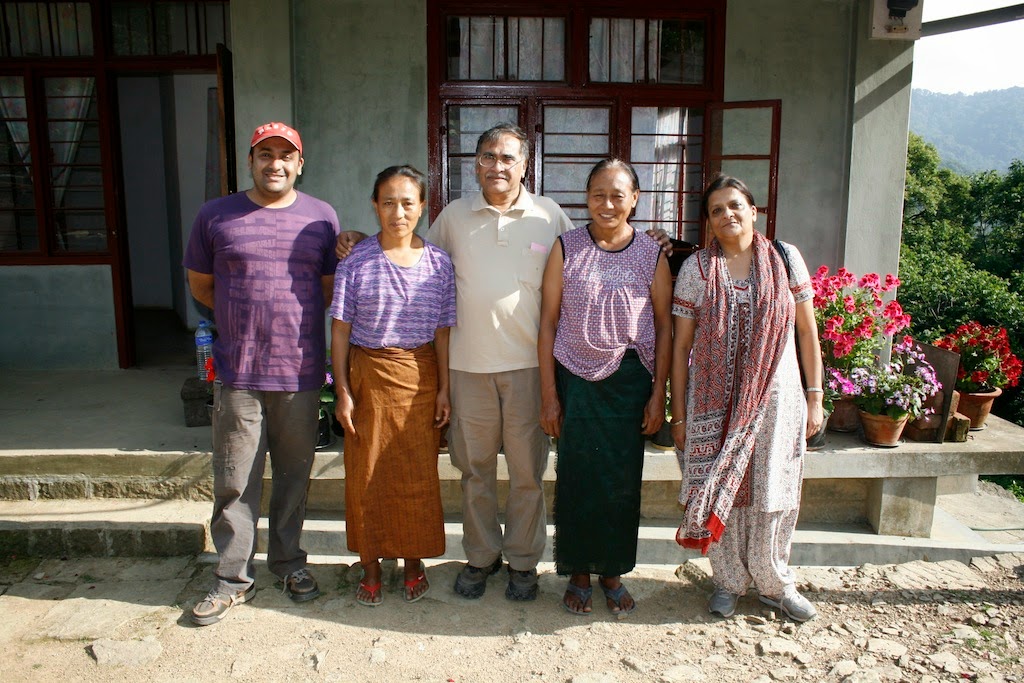 We had initially planned to visit Mokukchung and Longleng districts, but were advised to look for alternatives in view of the road conditions. So we planned a 3-day visit outside Kohima spending nights at the heritage village, Khonoma, and Pfutsero, the village at the highest altitude. Visit to Khonoma was a revelation; we had never seen a village as beautiful and clean as this. The houses were well maintained; there were no garbage dumps on the streets or outside houses. There were flowers blooming everywhere. Each house had dozens of flowerpots all around. There were many historical places within Khonoma, and our guide, Martin, explained to us about all. We trekked to a little further away, and could spot Indian gaur (locally mithun) in the wild. They are semi-domesticated, and are owned by people from the village. 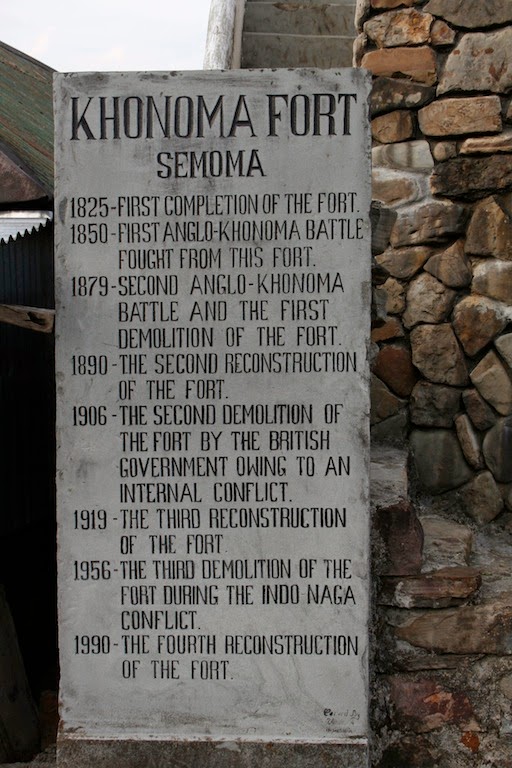 The two ladies (perhaps sister) gave us delicious vegetarian lunch, as if they were cooking veg meals all their lives. It was all organic and from their own fields: red rice, potatoes, green leaves etc. But very touching was the warmth with which they fed us. They conveyed to us through our guide that on our next visit to Nagaland, we must stay with them. In the evening, the temperature went down quite a bit; we were staying with a family and they had also prepared veg lunch also. The dining hall was warm with burning wood, the family and their nine cats and kittens. The cats wanted to jump to our dining table again and again, but once they realized we were feasting only on veg food, they became disinterested. Next morning after having breakfast of bread, porridge, freshly plucked plums, and bananas, we left for our next village, Pfutsero, but not before shopping for red rice and honey. 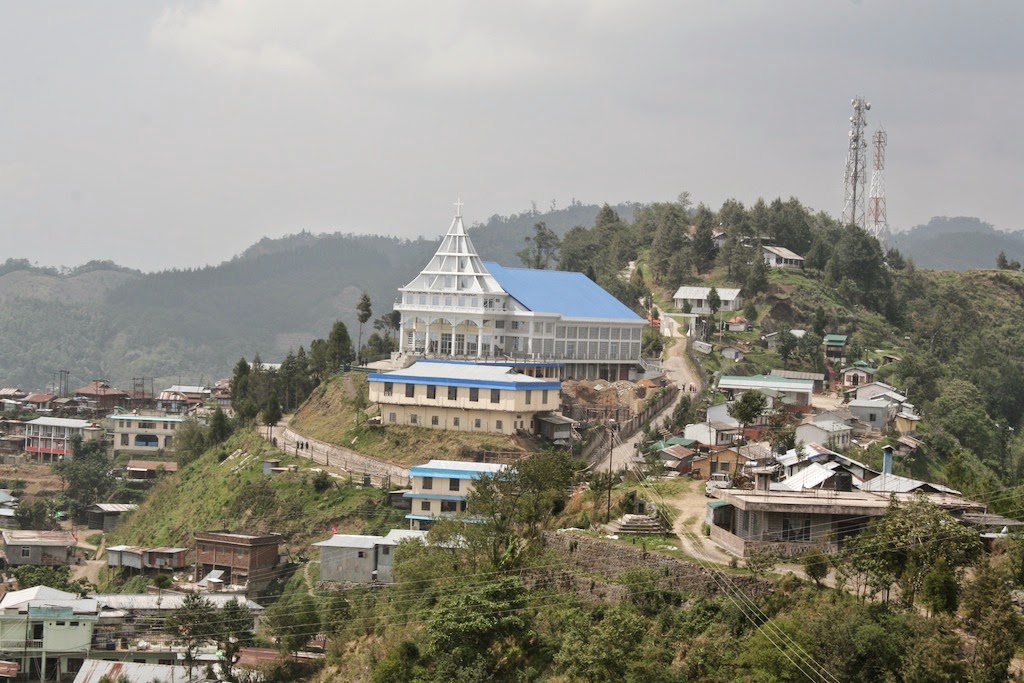 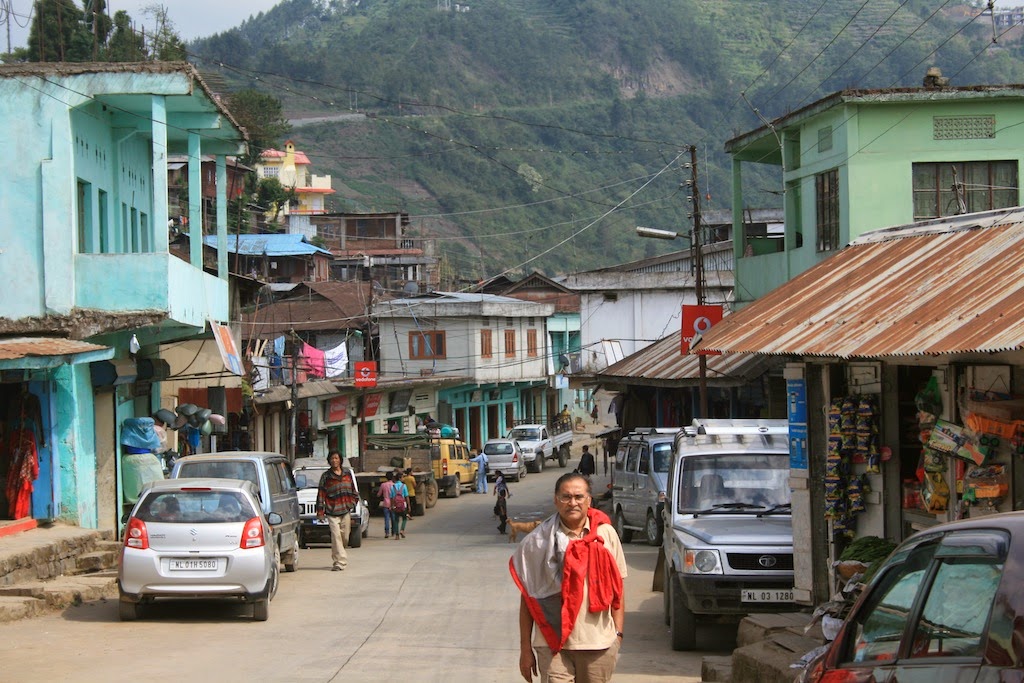 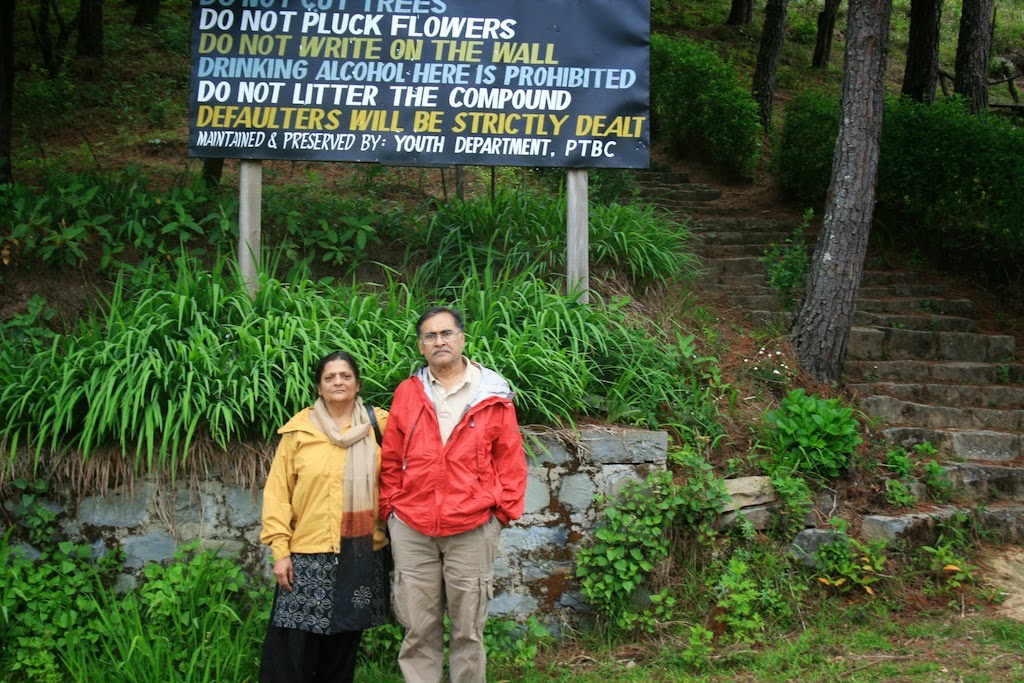 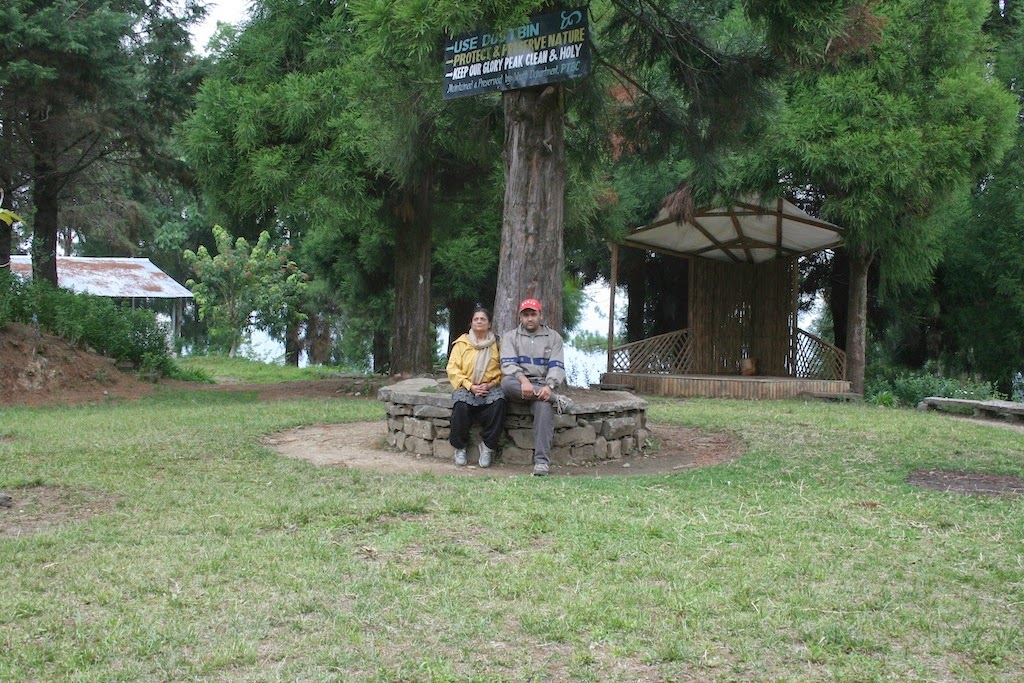 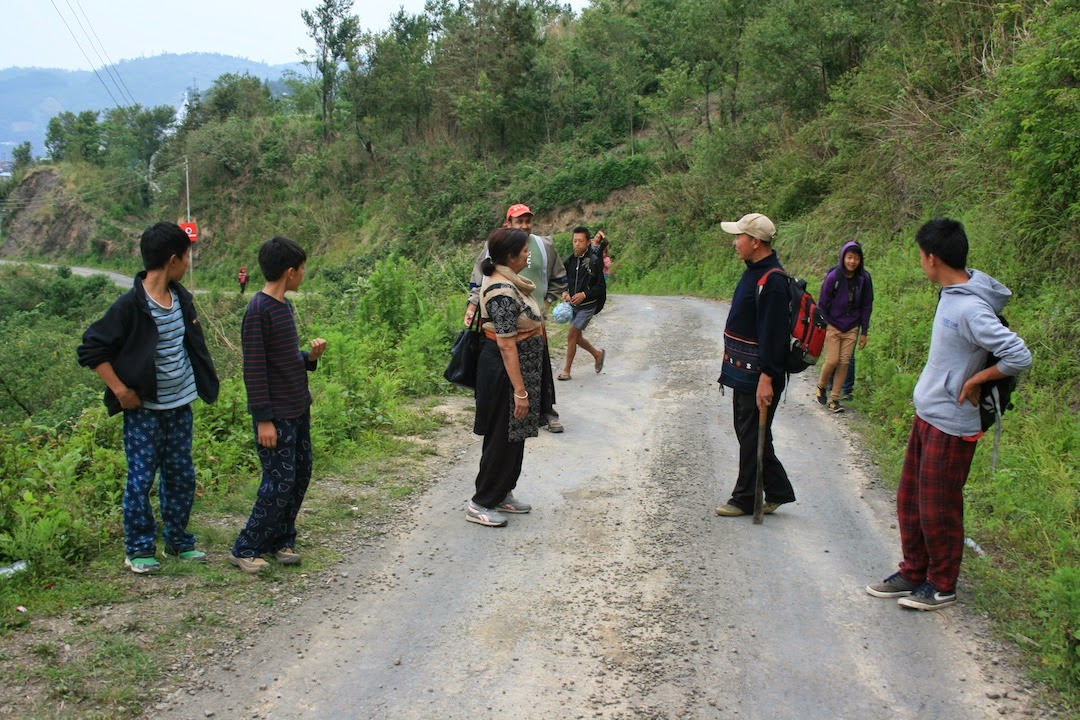 Pfutsero is the highest and coldest inhabited town in Nagaland situated at an altitude of 7000 ft. It is said Nagas first came to Pfutsero before settling down to other areas of Nagaland. It is again a picturesque town from where you can trek to some other beautiful places. What one perhaps everyone does is to trek or drive to Glory peak; we went up by car, but came down walking. While trekking down, we met a few groups of local people walking up into the mountains; met one teacher, who educated us about the various Christian sects inhabiting in Pfutsero. It was our third day, and it was time to return to Kohima. By this time, our driver, Rajkumar had become friendly with us. He was a Nepalese, but was born and brought up here, and had never been to Nepal. For most of the year, he drives oil tanker. He told us interesting stories about how oil is pilfered from the tankers. He promised to take us to some interior places in Nagaland in our next visit. Inshallah…
We had a lovely time in Nagaland, and enjoyed our stay; we found people warm and friendly, and willing to help. Had no difficulty in finding veg food. At Pfutsero market, we had poori-chholey for our breakfast in a small restaurant owned and managed by a Nepali family.
If given a chance, I shall like to come to Nagaland once again, and may like to visit some of the inner towns, and will not mind travelling in the local bus.

The pictures make the trip come alive! I hope to visit the '7 sisters' esp Nagaland one day.
Love, Ishu

you are most welcome to join us next time.

Sir,
You are just incredible, with love n passion that I have matches exactly as yours. How do I subscribe to your posts Sir or if you can add me to your blog, I would be highly obliged. I am a big fan of Antarctica region, would be of help if you can let me know how do I contact or reach Maitri team in Antarctica region. Thanks for your time Sir!

Nagaland is breathtaking. Also people are warm and welcoming. Thanks for sharing..