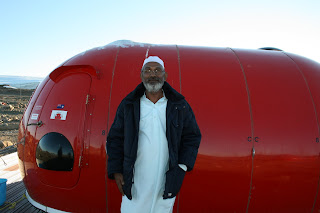 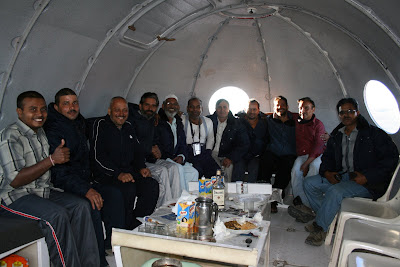 I am so full of my Antarctica days. Any event, even remotely connected, fills me with nostalgia. But the Eid that I celebrated last year while at Antarctica will always remain a cherished memory in my mind for ever. Let me tell you about it.

Last year Eid was celebrated in the Maitri on 21st December, 2007. I had gone for a long walk at about 4 pm after talking to Chitra. I returned just before 7 pm (and it was bright day light) and headed for Annapurna lounge for having tea. I was surprised not to find anyone there. I was just wondering what happened when I found all the spoons missing. I guessed immediately that some party was going on in the summer camp. I went to the recreation lounge of the summer camp, Dooda Beta, looking for the group but was more surprised finding that it too was totally deserted. I was now certain that Eid party was in full swing somewhere, and just when I was scratching my head I noticed a bucket outside the igloo hut. And that gave it away since this hut usually remained locked. Reaching there I found the party in full swing. One does not need any invitation to join the Eid celebrations, so I jumped in. I was welcomed very warmly by Sheikh Ghaffar Saab who produced a bottle of Scotch to welcome me. Other people were happy with Rum. People were cracking jokes and reciting Urdu poetry. I was also asked to speak something. I recited a poem by Kaka Hathrasi that I reproduce for you. This poem is more than 40 years old and we as kids listened it many times on All India Radio.

It is about the days of early 1960s when adulteration was rampant in Indian markets. Kaaki sends Kaka to fetch pure ghee from the market, and when he brings it she immediately declares that it is as good as kerosene oil!

I also narrated my most favourite story of Eid by Munshi Prem Chand “Idgaah”. I am sure you remember it, or I will reproduce it some day.

In the Maitri dinning haal, Ram Das and Narayan had made biryani of both kinds, to top it with gulab jamun. What else I could do after taking some scotch but to indulge myself. So I had 4 gulab jamun, and just when I was about to finish, SK Singh came along and announced that I must have gulab jamun with yoghurt. That is the way sweets are consumed in Bihar! So I had two more. I reassured myself that I would walk extra mile next day.

LOL @ all the spoons missing.

And it is after a long long time that I am reading a mention of Kaka Hathrasi. I remember in the good old Radio days, his poems would be aired now and then.

It was nice to see and read about antartica. I will like to be there once again.