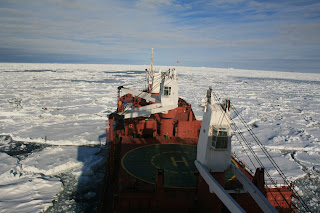 Having spent two months on the ship this year, and passing through some risky area of the Indian Ocean while sailing from the Antarctic Ocean via Cape Town and Indian Ocean, news such as ship piracy in such area of course attracts my attention. While on the ship, I was quite surprised to learn that ship piracy is a regular risk with the ships and its crew especially cruising in the Gulf of Aden. During my daily visits to the Radio Room at M.V. Emerald Sea for making/receiving phone calls from home, or collecting/delivering emails, I would see printer regularly printing alerts from the maritime bureau. If you ever thought that the ship pirates in current times existed only in the Hollywood, then improve on your information and general knowledge. They are every where in different oceans with high speed boats and modern weaponry. Fortunately, we were safe in Antarctic Ocean; so far no incident of ship piracy has ever been reported from this continent. In fact the menace of the ship piracy is so rampant that many maritime bureaus have dedicated and specialized crime services to collect and disseminate information to alert the ships about the risky areas. There are many famous books and movies on sea pirates, the latest being Pirates of Carribean. There are now dedicated websites on this subject.

It is a big relief now to the families of all the sailors on board the ship, MT Stolt Valor. It was hijacked by pirates 38 nautical miles off the coast of Yemen in the Gulf of Aden more than two months ago while it was on its way from the Suez to Mumbai. The Hong Kong-registered ship was carrying a cargo of oil and chemicals. Apart from 18 Indians, the crew members also included two Filipinos, a Bangladeshi and a Russian.
At any given point there are one lakh Indian sailors on foreign seas; India is the largest suppliers of sailors and yet there is no system in place to ensure their safety. There have been so many such incidents in the Gulf of Aden, this was the 54th incident this year.
Surprisinghly, despite such high numbers, India is neither a part of the UN Coalition Force that patrols the area nor is there any set protocol for dealing with such incidents.
Last week only, the Indian Navy was able to prevent the hijacking of m.v. Jag Arnav in the Gulf of Aden because it was an Indian ship. The Stolt Valor was, interestingly, Japanese vessel registered in Hong Kong. Owning and registering of ships is also a complicated process. M.V. Emerald Sea, for example, a Greek ship, was registered in Liberia to save the taxes. Liberia and Panama remain very attractive cities for registration of such huge vessels as they do it at very cheap rates.

Some actual and attempted incidents:

December, 2007, Dar Es Salaam: Pirates boarded a container ship drifting. They broke padlocks, removed container lashings bars and stole ship stores and cargo.
November, 2007, Belawan, Indonesia: duty quarter master onboard a product tanker at anchor noticed two robbers hiding under windlass. Crew alerted, robbers jumped overboard and escaped in a boat waiting below.
November, 2007, Arabian Sea: A reefer underway detected a small boat on radar at a range of 4 nm approaching from the starboard side; alarm raised, lights switched on. The boat moved away.
November, 2007: In the Gulf, a suspicious craft approached a tanker. Master sounded general alarm, increased speed, crew mustered and fire hoses standby. The speed boat closed at 0.1 nm, and when it noticed crew alertness, aborted approach and moved away.
November, 2007, Somalia: A car carrier noticed an unlit boat at 3 nm off the port bow with a speed of 19 nm. The boat reduced speed to match the speed of the vessel. Another unlit boat observed at 2 nm. Master raised alarm; crew mustered and switched on deck lights. Both boats moved away.
November, 2007, Vietnam: Robbers armed with knives boarded general cargo ship at berth. Port security informed. Ship stores stolen.
November, 2007, Malacca straits: an unidentified small watercraft approached a chemical tanker underway. Alarmed raised, the craft came within 150 meters and aborted the attempted.
November, 2007, Mozambique: Robbers boarded a container sip at berth and stole ship store amid tight anti piracy watches. The ship had shore security personnel deployed by the port security. In addition there were armed security guards on the shore side.
November, 2007, Hoogly river, India: Six robbers armed with knives boarded a chemical tanker at anchor, via the poop deck. Crew raised alarm and activated anti-piracy measures. Robbers jumped overboard and escaped, with ship’s stores in their waiting boat. No injuries to crew. Reported to harbor pilots but no action taken.
November, 2007, Mogadishu, Somalia: A general cargo ship was boarded and hijacked by seven armed pirates while at anchor after discharging cargo at Mogadishu. Pirates took control of the bridge, engine room and steering room. There was a fight between the crew and the pirates. Six crew members were injured. An U.S. warship rendered assistance in rescuing the crew and ship.
September, 2007, Haiti: Robbers armed with knives boarded an anchored general cargo ship unnoticed. Ship’s general alarm sounded and crew mustered, robbers jumped overboard and escaped with ship’s stores. Attempt to contact the local authorities were futile.
September, 2007, bonny river anchorage, Nigeria: five robbers in two motor boats armed with guns and knives boarded an anchored chemical tanker from the bow using ropes and hooks. Duty crew spotted the robbers and raised the alarm. The robbers broke the locks on the forward store and stole ship’s stores and escaped. Bonny signal station was called many times, but did not respond.
By Sudhir Khandelwal at November 17, 2008

Hi,
Suddenly the media has suddenly woken up to the cause and plight of ships and sailors at the hands of ship pirates. There was so little coverage during the period of their hostage drama. Finally the govt of india has woken up too, and seems to be getting into action to protect its citizens outside India.

Wow, this was some information.
Its the first time I had so much of consolidated info about the recent piracy attempts.
Thank you.