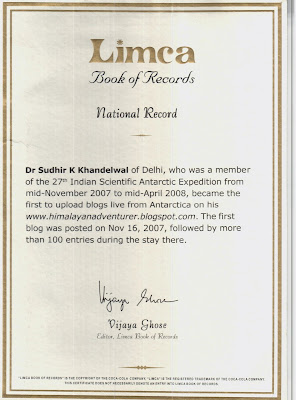 I am happy to share this news with the readers and followers of this blog that this blog has found an entry in the Limca Book of Records for being the first live blog by an Indian from Antarctica. When I was preparing for my expedition to Antarctica, there were many things in mind. Though we had received some training at the Indian Mountaineering and Skiing Institute at Auli in Garhwal Himalaya by the expert instructors of Indo-Tibetan Border Police for negotiating snow and glacier walking and learning to tie various kinds of knots used in rescue operations, yet there were doubts and issues which needed attention and fixing up. One such concern was communicating with the family and friends on regular basis since I was going to be away for not less than four months. Though Chitra had very sportingly supported my wish to go to Antarctica, but she needed to be assured of my welfare on regular basis. I had told her that Maitri, the Indian station at Antarctica, was well equipped with internet and telephone services, but I knew it was easier said than done. Internet facility was limited and we could send and receive emails only through group email id (Maitri@ncaor.amosconnect.com) which could not exceed 50 kb size; telephone was available all the time but was exorbitantly expensive at Rs 200/- per minute. Communicating with family was OK, but with friends it was going to be tedious with these limitations. It was during discussions with Chitra and kids that Kush suggested to start my blog to share my diary and experiences of Antarctica. He offered to start the blog and then update it as regularly as I wrote my experiences. He was already into blogging and had started his own blog some time back: www.tantrikclimber.blogspot.com. It was a master suggestion; I would be able to share my Antarctica experiences with interested friends and visitors all over the world! Thus the blog got started on 2 November, 2007 and the first entry from Antarctica was posted on 16 November, 2007 – the day I reached there. All credit to Kush for his painstaking effort to put up posts regularly for next more than four months with suitable titles and editing, and also with photographs whenever I could send them. Thus, I posted more than 100 entries during my entire stay there. I would first email my intended post to Chitra, Kush and Vasu, and then Kush would upload it on the blog.
I found a new thrill in blog writing and have continued it since my return in April, 2008. I have found many fellow blog-writers through this blog, and am amazed to know them through their writings. Blogging is a very popular activity, and more creative people maintain two or more blogs on regular basis writing on varied subjects. I too follow some blogs regularly. Ever since I returned from Antarctica, my fascination with the amazing continent has only grown. I have discovered many other blogs by Antarctic expeditioners. I am continuing to write on Antarctic themes of general interests. Before this Limca award, another award had already come my way, the cute ‘Butterfly award’ bestowed by another popular blogger, www. manmahesh.blogspot.com.
Thank you all,
It has been a fascinating journey.
By Sudhir Khandelwal at April 19, 2009

Been reading this blog for a long time, and can't help get jealous! Antartica has always been a dream. And your blog has been a source of knowledge in recent days. Thanks!

Hearty congratulations! I have been visiting your post regularly after I came to know its entry.As Arun said, it has been a tremendous source of information in this field. I may send this news to some of my Marathi friends with your permission. Keep your "expedition" on!
Mangesh Nabar

Hi, Ishu; thanks. you deserve it no less.

Hi Arun; I am glad that you find the blog interesting. By the way, I visited your blog too, which shows your own multi-faceted talents. I will visit it again.

Dear Mangesh, you are a loyal visitor. Of course, do inform your friends; who shuns publicity! By the way, did you share Marathi translation of one of the posts of this blog with your friends?

Many congratulations.
I am proud to know the blog. And prouder of the fact that it happened to be among the first ten blogs that i added when i started my blogroll.
Here is wishing you many more such record entries too....