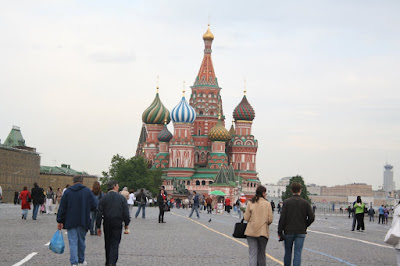 To be honest, I did not know many of the amazing facts about Russia till we decided to visit it. Apart from my knowledge of Russian royalty of 19th and early 20th century, its architecture, its role in WW II, a little bit of Lenin, Stalin, and the communist era, my awareness of the current Russian nation was not too positive having been fed by the media of its mafia and crimes, and its stinking billionaires. I was a bit apprehensive: politically, India had always considered Russia as a staunch ally, but post-cold war scenario could be different; the generation which went berserk over Raj Kapoor in 50s and 60s would no longer be there; if there was no St Petersburg in the itinerary, I might not have considered visiting Russia
First some facts about Russia and Moscow: Russia, even after the disintegration of USSR into more than a dozen independent nations, is the largest country in the world extending over Europe and Asia covering more than 12 percent of Earth’s area and spanning 11 time zones. Russia has the world's greatest reserves of mineral and energy resources, and is considered an energy superpower and is world’s largest energy exporter. It has the world's largest forest reserves and its lakes contain approximately one-quarter of the world's unfrozen fresh water.
It is world’s sixth largest economy, and has been averaging 7-8 percent growth in its GDP. The Russian Constitution guarantees free, universal health care for all citizens. Russia has more physicians, hospitals, and health care workers than almost any other country in the world on a per capita basis. As of 2007, the average life expectancy in Russia is 61.5 years for males and 73.9 years for females. The biggest factor contributing to this relatively low life expectancy for males is a high mortality rate among working-age males from preventable causes (e.g., alcoholism, smoking, traffic accidents, and violent crimes). As a result of the large difference in life expectancy between men and women and because of the lasting effect of World War II (Russia lost more men than any other nation in the world), the gender imbalance remains to this day and there are only 859 males to every 1000 females. Till recently, the Russian population was showing a declining trend. Since 2007, the Russian government has implemented a programme whereby women are paid around US$ 10,000 if they have a second child. 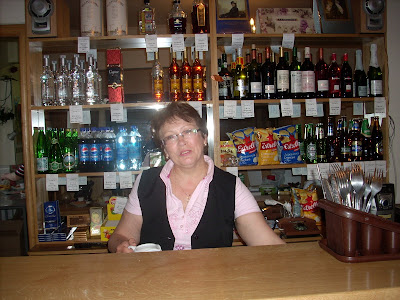 After having dealt with St Petersburg successfully and joyfully, we were better prepared to deal with Moscow, a large city by any standard. We knew by now that there were no meters in the taxis and you had to settle the fare in advance; an average citizen knew no or very little English; there was an excellent bus and metro service linking practically every nook and corner of the city and you could master it within a day or two; veg meals, veg pizza and burgers could be obtained and there were many Indian restaurants in Moscow. And what we were most assured of was the fact that crime and law and order was not a significant issue if you took some basic precautions, like, not getting out of a disco or night club at 2 am dead drunk.
Our flight landed at domestic terminal of Sheremetyevo airport and we had no difficulty in hiring a cab having earlier enquired the approximate fare. Our hotel was within the city and four metro-stops away from the Red Square. It was situated in an open area with lot of blooming trees around. There were 4-5 blocks of this hotel each having 1-2 restaurants. Our guess was that it must have served as a youth hostel or something in earlier days. The room was basic but had a fridge and TV, though the latter had no use for us as was airing only Russian channels. The Russian hotels, whether 3-star of 5-star, do not provide you with an electric kettle and tea-coffee bags in the rooms. But our plan included complimentary breakfast. The lady at the restaurant took special care of us when she found we were vegetarians. So if you are planning to visit Russia and are fond of your bed tea, carry your kettle and tea bags. Same evening we ventured out to visit the city centre, and managed to reach the Red Square and Kremlin. Asking for directions was a risky affair. We did not know if the person had understood where we wanted to go, and we were also not sure if we understood where he was asking us to go. We spotted a well-dressed gentleman, and just thought he could be English speaking. And yes, he did. He explained us the directions patiently, and then asked us if we were from India. Now we asked him if he ever visited India. He replied it was an interesting question as he had visited India three times! What cities? It was Bhuj on the first occasion. We were flabbergasted, of all places he chose Bhuj. Chitra was quick to think it must have been in connection with earthquake there. Yes, he was a rescue expert. After his first visit, he told himself, never again to India. But official work brought him to Delhi second time, and he thought, yeh, may be next time also. And after his third visit, he would look for an opportunity to visit India once again. 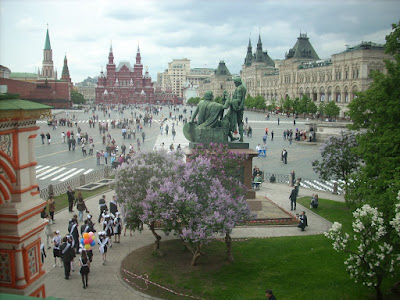 Red Square and Kremlin are incredible places along with all the churches, cathedrals and other buildings within the compound. You need to see all this yourself to appreciate the grandeur and vastness of this place. Though the tourist season had not started yet, there were people all over. And all around it are so wide roads that we hadn’t seen elsewhere. Inspite of a far reaching and efficient metro service, these roads are usually jam packed with cars and buses. Though you see all the latest models of merc and BMW, but most of the cars are older models, small or medium sized. We could manage to see many of the important tourist attractions of the city. We avoided museums since, I believe, Russia must be having the largest number of museums in the world, from Museum of Erotica to Sigmund Freud Museum of Dreams. Earlier we believed that the most beautiful churches and cathedrals were only in Rome or Prague, but St Petersburg and Moscow are very close in the race. Moscow can boast of some ultra-luxurious clubs and shopping arcades. Of course, any shopping at these places was out of question. But we did visit a weekend market in the outer skirts of city having hundreds of shop selling souvenirs, Russian handicrafts, shoes, bags, and garments etc. A sizeable number of these shop owners were those Afghanis who originally must have been from Indian sub-continent. They could speak some Hindi sentences.
Alcoholism is major health hazard in Russia, but cigarette smoking is a big public nuisance. It is rampant among men and women both. I think the only place they do not smoke is the metro. It is very common for people to walk in the streets smoking. I must have inhaled every day equivalent of one full packet. I must visit Himalayas to get rid of all the smoke deposited in my lungs. 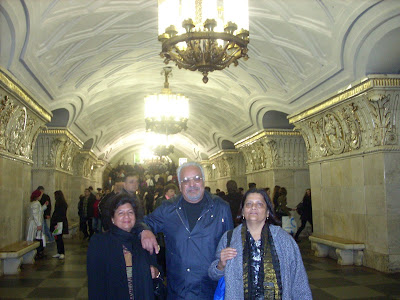 Metro service of Moscow must have been the largest in the world. It ferries 9 million passengers every day, more than that of London and New York combined together. Frequency is incredible too, at peak hours you do not have to wait for more than 30 seconds! Some of the stations on the Ring Line were breathtakingly beautiful, marble faced, frescoed, with gilded work of arts. The art work depicts history, war, and Russian life. We had not seen such beautifully done metro station anywhere in the world.
During the time we were in Moscow, Jag Mohan and Gurmeet were also there. We met up with them on a few evenings, and they invited us for a meal at the Indian restaurant, Maharaja. On our penultimate day, we went to outskirts of Moscow to visit the University of Moscow, and also to go to the ‘look-out point’ from where one could see the entire city. It was raining, and we crossed a large wooded area to climb up to that point. While negotiating a small incline covered with fallen leaves, Chitra slipped and fell down hurting her left shoulder. 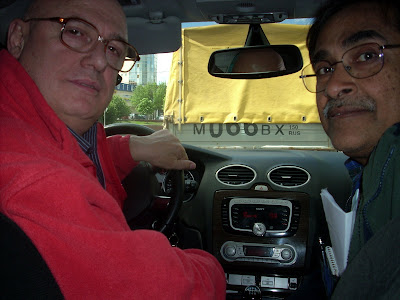 On our final day, the taxi driver taking us to the airport seemed very pleased to learn that we were from India. He managed to convey to us that he was 61 years old, and had seen ‘Awara’ seven times 50 years ago. As if on a cue, we broke into the famous Raj Kapoor song, ‘Mera Juta hai Japani’, and he joined us in the chorus. We bade him ‘Dissvidaniya’ at the airport, and wished that when and if we visit Moscow once again, he takes us to our hotel from the airport.
By Sudhir Khandelwal at June 14, 2009

This was as interesting as the Petersburg diary. So people still identify india with RajKapoor and music from his films?
How is Chitra's shoulder now??

Mampi, people of that era are still nostalgic about Raj Kapoor. In the video shops there, we saw CDs of current Bollywood movies with Russian dubbing, but people did not seem to remember any of the current stars or numbers. Chitra's shoulder showed a hairline fracture, and has her arm in the sling.