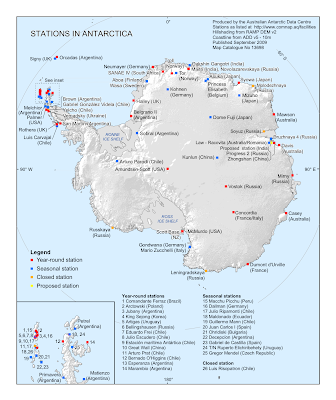 The International Polar Year is a large scientific programme focused on the Arctic and the Antarctic from March 2007 to March 2009. IPY, organized through the International Council for Science (ICSU) and the World Meteorological Organization (WMO), is actually the fourth polar year, following those in 1882-3, 1932-3, and 1957-8. In order to have full and equal coverage of both the Arctic and the Antarctic, IPY 2007-8 covered two full annual cycles from March 2007 to March 2009 and involved over 200 projects, with thousands of scientists from over 60 nations examining a wide range of physical, biological and social research topics. It was also an unprecedented opportunity to demonstrate, follow, and get involved with, cutting edge science in real-time.
The Scientific Committee on Antarctic Research (www.scar.org) is organizing its 31st Open Science Meeting in Buenos Aires, August 3 – 6, 2010. The SCAR is an inter-disciplinary body of the International Council for Science, and is charged with initiating, developing, and coordinating high quality international scientific research in the Antarctica and providing independent scientific advice to the Antarctic Treaty System. SCAR was established in 1958 to coordinate the Antarctic data from the International Geophysical Year 1957-58. SCAR has grown over 40 members and new applications are received every year. India became a member of the SCAR in 1983 once it established a permanent station, Dakshin Gangotri, in Antarctica.
By Sudhir Khandelwal at February 02, 2010

amazing that such authentic sources and such responsible agencies should issue such casual statements about so big an issue.

Hi, Mampi; doesn't it leave us all perplexed and confused! One wonders whether global warming is man-made or a cyclical phenomenon. The biggest casualty is the whole issue of 'global warming', whatever causes it. The oil industry and its big consumers must be laughing all the way.