Please click the following link for a slide show : 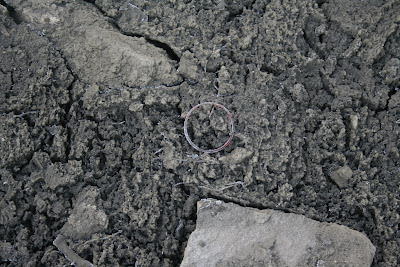 TREKKING TO ROOPKUND - the mysterious lake 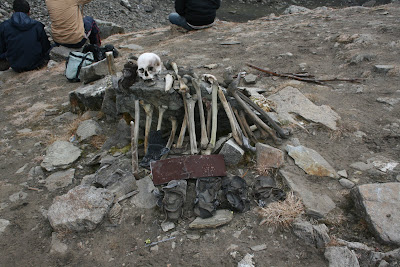 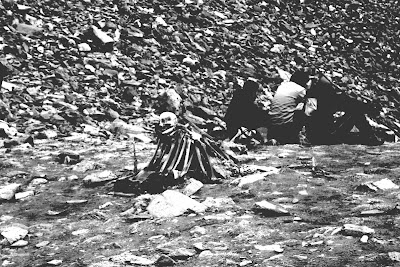 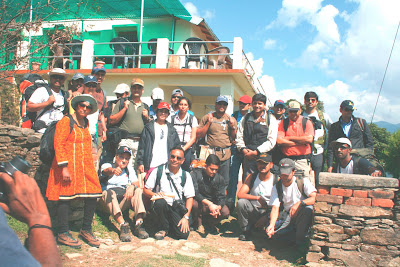 Our itinerary over next 5 days would take us to Didina, Bedni Bugyal, Patal Nachauni, Bhagwabassa, and finally to Roopkund, taking us from 8000 ft to 16000 ft. The trek is of moderate difficulty, and needs physical preparation before one undertakes it. But the difficulty is duly compensated by the beautiful and varied landscape throughout the trek: dense forests, waterfalls, hurtling water-streams, vast expanse of undulating meadows (bugyal), the kind you would rarely find elsewhere, and snow covered famous mountains and peaks.
I was expecting a clear sky in the first week of October, and was eagerly looking forward to seeing the majestic mountain range during our trek and stay. Weather gods did not disappoint us. During the entire trek, we had clear blue sky, fantastic view of the mountain range, a night sky that was star-gazer’s delight; had not seen so many stars in the sky since my days in Dharan (Nepal); those who were keen students of stars and planets were thrilled to view milky way through naked eyes. And we were not troubled by rains, hail-storm, (un)welcome snow fall, or extremely cold nights. Vasu had gone there in the month of June this year, and the group encountered all of the above making trek a bit, I should say (tongue in cheek) more exciting; the entire stretch from Patar Nachauni to the Roopkund was covered with snow in the month of June.
After Didina, we passed all the way up through a dense forest of pines, oaks, and rhododendrons. There must be many more kinds of trees, I am sure, but I did not recognize them. Many of the trees were afflicted with parasitic growth and were dying. There were birds chirping all the way, but were difficult to sight. It required patience to spot them. Since I was anxious to make to Bedni Bugyal on time, so did not break my walking rhythm. The dense forest opened suddenly to a vast meadow, the kind you do not see very often. 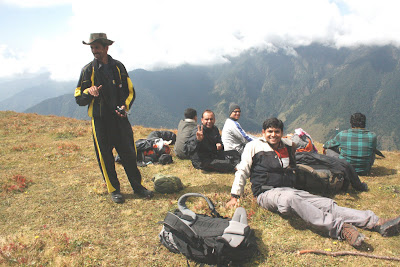 The first section of meadow was Ali Bugyal followed by Bedni Bugyal. On all sides, it was like a never ending meadow. We were fortunate to have clear visibility to have a fantastic view of mountains all the time till we left for our next camp following day. Group members were clicking shots all the time, and had photo-shoots of themselves against the backdrop of every peak. Theirs will be a portfolio worth admiration against backdrop of picturesque peaks. The peaks visible were: Bunder Punchh, Hathi parvat, Chaukhmaba, Neelkanth, Nanda ghumati, and Trishuli. 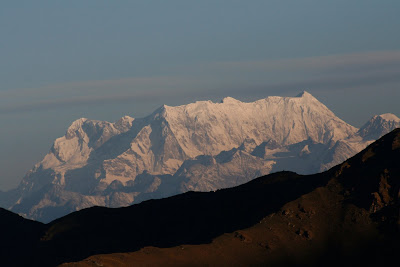 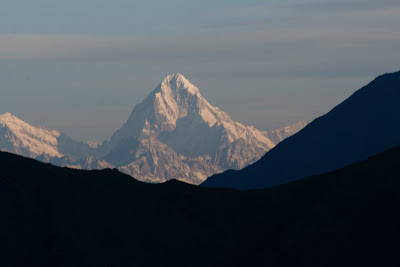 If one wishes to camp in upper Himalayas for a longer period doing nothing but just soaking oneself in nature’s bountiful sunshine and unpolluted air under starlit night sky, then, Bedni Bugyal would stand out to be one such great site.
At every camp, we were treated with fresh and hot meals, and in the morning before our departure we were given a small packet for replenishing our energies during the gruelling trek. The cooks and the supporting staff were very courteous and polite, and would insist that we ate properly. If for some reason, we could not get out of our tents, they would serve food inside our tents too, never resenting any of our demands. Group members too made no fuss about the food. But I found our fellow trekkers from Bangalore particularly allergic to potato; they would just not eat it. They said potato was not a part of their usual diet; they found it causing ‘gastric’. But what I found amusing was their relishing packaged potato chips, and ignoring that it was deep fried and laced with hot spices. We in north India can’t imagine our lives without potato. In fact I am a big fan of potato; it contains many essential micronutrients and is an easy source of energy; the only catch is that you should not fry or peel it.
After Bedni Bugyal (11,500 ft), the trek went up and up; the tree line had finished before Ali Bugyal, so the air was thin and low in oxygen making walking up a bit more strenuous than what it had been so far. The landscape had too changed. The chirping of birds had also ceased, but one could see hill crows and soaring birds of prey and vultures in the sky.
The trail to Patal Nachauni (or Ghora Lotani; Ghora is horse, and Lotani is to rest or lie down) passes through a temple and a kund (water pond). As we went up, it became cold and chilly. The camp site, though was secure in fibre huts, was not very exciting; plastic was everywhere. We had retired early in our huts, when to our utmost surprise, the kitchen staff brought food inside the huts. It was a heavenly gesture, as the chilly winds had almost killed the appetite. The sleep and appetite were slowly becoming a problem for many of the group members as we were gaining height; we were already at 12,500 ft.
Our next camp was Bagwabassa at 14,500 ft. One could call it base camp for the Roopkund. The air got thinner, and temperatures really low. Vasu tells me that in the month of June (when Delhi was scorching), the entire trail from Patal Nachauni to Bagwabassa, and Bagwabassa itself were covered with snow. One has to believe since it is so evident from the photographs. When we started from Patal Nachauni, it was foggy and misty; fortunately, there were no rains or any hailstorm. But the mist was giving quite a mystifying look to the entire area, almost making a perfect setting for shooting a suspense thriller. Though the trail to Kalu Vinayak temple is described to be an easy ascent, but each step would make me breathless. And negotiating path with stones and small boulders would leave all joints of lower limb tense and tired. As the name suggests, Kalu Vinayak is Ganesh temple with a black stone idol. Besides being a site for offering prayer for success of the group, the site also offers an ideal place for rest and photographic opportunity. Descent from here to Bagwabassa is gradual, but not easy, since you have to be careful all the time on the stony trail. But the feeling on sighting the camp site is euphoric; you almost feel you would make it now to the top. Just before the green fibre huts for our stay, there were a few stone huts made by locals for the tourists. We did not stay there, but I am sure staying there must be giving a feeling of living in stone age, or being a cave man. With each passing hour, mercury was dropping and we were told it would be sub-zero during the night; but then we would be in comfort of our huts and sleeping bags. Despite being warm inside the hut, it was difficult to have a long stretch of nap; whether it was the excitement and nervousness for next day’s trek or thin air, is difficult to say. In the evening we were fortunate to spot a group of about 7 'bharel' (mountain goats); it is an extremely shy animal and you would see it only from a distance, as we did it in some of our earlier treks.
I had started early for getting to Roopkund; I knew I would be slow and need to stop more often. And in reality, it turned out to be a slower progress. Each step was an effort and would leave me breathless. Dinesh, our ever-smiling and ever-helping trek leader, was constantly guiding me to move forward, and was a constant source of inspiration. I would say he literally held my hand to take me to last stretch of trail. On our way up, we saw Brahm kamal and Neel Kamal in plenty. We also saw a group of partridges (or was it quail). How did I feel on reaching the top? To be honest, it was a sense of relief of having finished climbing. The sense of accomplishment came later, and sank in much later. I was happy that I could do it, and fulfil a long cherished desire. 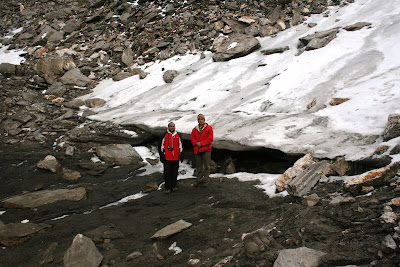 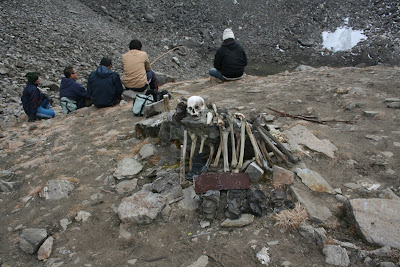 It is said that it is meaningless if you do not climb up to Junargali, which is the end of the pass, and from there you get unobtrusive view of the peaks. But I was satisfied with whatever I could achieve. I did not forget that climbing up is only half the trek; one also needs to get down safely and reach the camp on time. We were to head to Bedni Bugyal, a trek of more than 15 km on a zigzag stone and boulder trail.
I was helped immensely by the team of Indiahikes. It has put up a great team at Lohajung, and each member of the team helps to get you to finish the trek successfully. I was also fortunate to be part of a group where each member clicked well with other members. I would love to do another trek with Indiahike and the same group members.
Going to mountains has always been a humbling experience for me. We are always talking about the fragile eco-system and environment, but when you see nature at close quarters, you realize the might of nature too. One feels so small and insignificant before the hurtling and gurgling rivers and huge waterfalls, and mighty and grand mountains. I always believe in and owe our existence to the benevolence of nature; and would dread its fury. Going to mountains is to express my reverence to the omnipotent nature.
Right now, my Mama, 82 (Motor Mama, as we address him), is raring to go all the way up to Lohajung in his Nano car to camp at Bedni Bugyal. Don’t be surprised; he has already been up to Badrinath shrine twice in last two years in his Nano.
By Sudhir Khandelwal at November 22, 2011 19 comments: