Auli - getting in shape for the big white island! 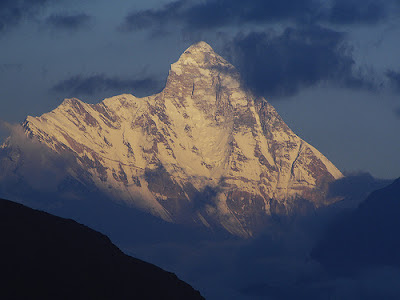 Antarctica….the seventh continent of the earth, is the most unique since it is a frozen continent with no known human habitation. It is ordinarily inaccessible, and conditions are so extreme that survival is impossible for unprepared and unequipped human beings.

I started thinking of Antarctica seriously after my expedition to Kailash-Mansarovar in the summer of 2006. It was Chitra, in fact, who perhaps jokingly asked me what next after Kailash Mansarovar! Antarctica? And then there were others who had visited Antarctica as members of the Indian Scientific Expedition encouraging me to submit a research proposal to the National Centre for Antarctic and Ocean Research, under the Ministry of Earth Sciences. I proposed to study the longitudinal changes in the general and psychological health of expedition members who stay in Antarctica for short-term (3 months) and long-term (15 months) along with their coping strategies including tobacco and alcohol consumption. After being short-listed, I was called to make a presentation, and to my extreme joy I was informed in August, 2007 to get ready for joining the Pre-Antarctica Induction Training programme of two weeks starting mid-September at Auli in Garhwal Himalayas under the Indo-Tibetan Border Police.

Auli at the height of approx 8,000 feet is a popular centre for winter sports. ITBP has it Mountaineering and Skiing Institute at Auli to train defense personnel in mountaineering, rock climbing and skiing, and conducts rescue operations in the high altitude areas. It does not cater to the civilians with the Antarctic scientific expeditions being the only exception.

I joined a group of 25 young scientists to travel from Delhi to Auli via Hardwar and Joshimath covering a total distance of 500 km more than half of which was uphill drive. I was going to the holy city of Hardwar for the fifth time this year. The beginning was made in April when I went there with Bikash and Dottie. It is ritual with them to visit Hardwar whenever they are in India on short visits from Delaware, US. Dottie often remarks that in last more than 20 years of her association with India, the only city other than Delhi she has visited is Hardwar. Hardwar is the first city in plains where the holiest of the Indian rivers, Ganga, makes it entry after traversing an incredible journey in the mighty Himalayas.
Soon after Hardwar, hills begin and you see Ganga all the way up to Joshimath when the road bifurcates for Badrinath, a holy shrine, and Auli. The journey is incredible with its landscape of mountains, water-falls, pines, oaks and at times providing thrills with hairpin road bends and deep gorges. The Ganga, during this leg of her journey, is joined by its seven major tributaries, and its each such confluence has developed as a holy town.

Auli is the place to see some of the magnificent peaks of this side of Himalaya: the most famous being Nanda Devi. Others are Neel Kantha, Nar, Narayan, and many others. The beauty of Nanda Devi changes as the day progresses. The views at sunrise and sunset are just breathtaking. It is photographer’s delight.

The ITBP instructors did their job of physically training us and giving us theoretical and practical demonstrations on hills and glacier with their customary sincerity and zeal. I have earlier experience ITBP personnel’s devotion and dedication in ample measures during my expedition to Kailash Mansarovar. They not only provided security and helping hand during some difficult treks and while crossing fast flowing river streams, but their presence alone was a big comfort.
I had a great time with young scientists of the group. They represented different fields about which I knew very little. But it was heartening to listen to their animated discussion on subjects like astrophysics, space physics, troposphere, ionosphere, geomagnetism etc. It appeared India’s future was secure in their hands. Some terms sounded familiar, but I was totally dumbfounded by a specialty called Limnology. I had not heard of it before. Want to hazard a guess what it is about? Well, it is the physical, chemical and biological study of water.
By Kush Khandelwal at November 02, 2007

All the best.Through you we will be a
part of the trip.Keep in touch regularly.
Anirudh and Ravinder

Congratulations and all the best indeed! Please keep us posted. Dr. Mukherjee.

Great!we'll be with yooou thru this travelogue.. I did'nt know that you had such variety of interests.. &that already you have visited Kailash..itself an experience ..!will be reading this site periodically..v.much interested but alas my age now wont permit..Satish Malik

Wonderful, if this is the "aaghaaz", (beginning), then what will be the anjaam!!!

Wish you all the very best. i shall be looking forward to reading your adventures.
Zia Nadeem

Fantastic! This is an opportunity of a life time. I look forward to reading your travelogue. I wish you all the very best.
Niraj Ahuja

Thanx for starting blog. I will travell antartic with u by this blog. U make us proud, buddy!!