Fire is a major risk in Antarctica with grave consequences. When we, the members of 27th Indian Antarctic Expedition, were being trained and briefed at Auli, our team leader, Mr Arun Chaturvedi, veteran of many Antarctic expeditions, had very explicitly told us the risk of fire in Antarctica due to closed spaces, wooden structures, high wind, dry air and plenty of oxygen.
Unfortunately, inspite of it being a real danger and all the precautions, such accidents do happen in Antarctica with tragic results. Besides the loss of life, loss of scientific and communication equipments, medical and other supplies can also become major hindrance in the successful completion of expedition. Sadly, such an accident has happened last week at Russian station, Progress, situated at Larsemann Hills (its rough coordinates are: 69S and 76E).
I had visited this station in March, 2008 when I visited Larsemann Hills where India is also coming up with its third station. The Russian leader, Lukin, had greeted us very warmly, and the team doctor, again Lukin, had taken us around the station. I was very impressed with the new station coming up at Progress. I am reproducing below the mail which the Russian leader shared with all the Antarctic nations after the accident. The photograph below shows Mr Ajay Dhar, again an Antarctic veteran and leader of the summer team of the 27th IAE, with both the Lukins. 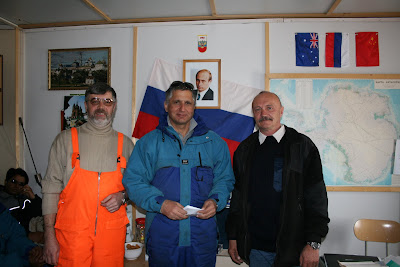 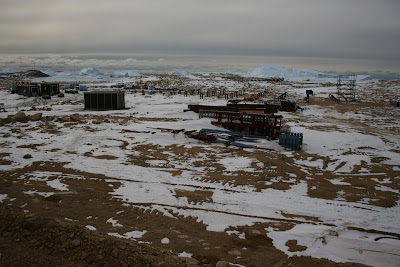 Dear COMNAP members,
With great regret I have to inform you that at night on 5 October around
2.00 Moscow time (4.00 local time) there was a fire at Progress station in
the two-storeyed living building. The station team was not able to cope with
the fire by their own efforts and the building was completely destroyed by
fire. The station team comprised 29 people including 10 builders. As a
result of the fire, one person is missing (the body was not yet found) and
two persons were injured (fractures of different gravity). All three people
are from the construction team. The injured people are now at the medical
unit of the station. On 7 October the Progress personnel began dismantling
the collapsed structures and probably they will find the body of the third
builder at this place. Most of communication facilities and part of
scientific equipment including all PCs were destroyed. At present the
station team (28 people) lives in the old small houses left by previous
builders. The fire did not spread to the other station facilities, so we
have the mess-hall and the galley, the medical unit, "warm" and "cold"
warehouses, all transport vehicles and also the facilities of the new
wintering station under construction (diesel-electric power station, garage
and repair shops, a bath-house, a heli-pad, fuel storage and the carcass of
the new building). All food, fuel and medical supplies were preserved. The
people are provided with normal meals, polar clothing and medical service.
The station continues to fulfil the program on geomagnetism, partly on
coastal oceanography and hydrography. Meteorological observations and
receiving satellite information were temporarily stopped. The Progress
station now has HF radio-communication and telephone satellite communication
via Iridium and RAE daily communicates with the station and Progress station
communicates with Mirny or Vostok stations twice a day. We are very grateful
to Chinese colleagues from Zhongshan station for their immense help and
various assisstance provided after the fire. The Zhongshan station is at a
distance of 1.5 km from Progress station in the Larsemann Hills on the coast
of Prydz Bay. The burnt building was built in 1991. RAE plans to organize a
flight of BT67 airplane from Novolazarevskaya station in early December. If
the state of the injured people aggravates, RAE will make this flight in
early November for evacuating these people. The R/V "Akademik Fedorov" will
approach the Progress station on 20 December and deliver the necessary
equipment and supplies and new personnel.
So far the cause of the fire was not determined. We have informed all our
wintering stations about this accident with the request to check all
equipment and safety emergency action plans.
We are not asking the Antarctic community for help as the situation at the
station is not critical and station continues operation.
Have a good Antarctic season.
Best wishes.
Valery Lukin
RAE Head
By Sudhir Khandelwal at October 11, 2008