NOW IT IS SARISKA... 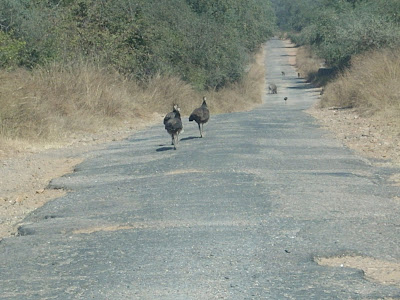 It seems to be happening for some time now; I am revisiting my favourite cities lately. First it was Dharan in Nepal, then Chandigarh, and now we recently visited Sariska. Sariska, as you know, is a wild life reserve in Rajasthan which has been lately making to the headlines for all wrong reasons. This forest could boast of a tiger population a few years ago; however, all the tigers have vanished, falling prey to the greedy poachers who supply tiger hides and bones to the weird taste of rich and famous who would adorn their drawing rooms with a dead tiger rather than see a handsome live specimen roaming and roaring freely in the wild. Rajiv Gandhi provided Sariska forest and Sariska Palace some moment of hype and glory when he organized an official meeting there soon after his assuming prime-ministership. However, I visited Sariska more than 30 years ago with Chitra, Chitra’s parents and Girish. That being my first ever visit to a wildlife sanctuary, I was excited and had an intense desire to spot a tiger. However, we could not see one; in fact, in many of my subsequent visit to this forest, I could never spot a tiger. Over the years I have realized (and now advise all who are visiting a sanctuary) that one should not visit a wild sanctuary with the sole aim of seeing a tiger. Each Indian wildlife park has so many other things and sights to offer that even if one does not spot a tiger, there is nothing to be disappointed. The tiger does not make appearance easily; after all, he/she is king of the jungle! But if you spot one, it is a bonus. 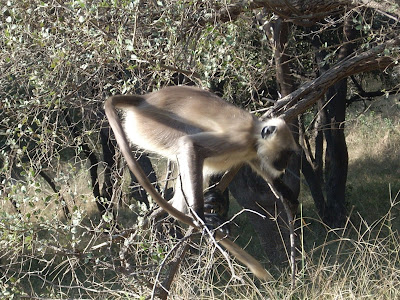 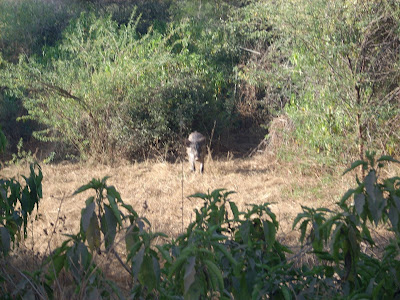 So this time around, when there was this opportunity to visit Sariska for a meeting, I almost jumped at it. Though I was to give invited lecture, the organizers were only providing local hospitality but no transport to and fro Sariska. It required some persuasion for Chitra to agree to this weekend trip, who took time off from a long list of her weekend errands. Sariska is 200 or 230 km from Delhi depending on which route you take; either way for most part you negotiate new Delhi-Jaipur toll road. This new highway is a world class road, smooth, wide and with good road signage. However, the driving habits of users are worse than any of the developing country that I have visited in Asia or Africa. The most horrible and dangerous are the drivers coming from opposite direction on your side of road. And these are not just occasional cyclists, bikes, or bullock cart or tractor, but all kinds of public and private vehicles. And the worst are these SUVs which are catering to the cyber cafes all over National Capital Territory. These SUVs, mostly Innova and Tavera, are the new road killers around NCT or beyond. Lately I have come to realize that truck drivers are unnecessarily the maligned lot. They are mostly underpaid, under-rested, and are always at the receiving end of public’s ire or police excesses. They still follow some of the rules of highway driving, or may give you way on request, but these SUVs would not ever budge. We left highway at Behror, and took a small road going to Sariska via Alwar for another 100 km passing through many small villages and village haat, and beautiful fields which were just glorious with yellow mustard fields at this time of the year. This road had very little traffic and almost no heavy duty vehicle, and driving would have been fun, only if the road was in good shape. It had not been maintained at all with potholes strewn all over. I am sure if it is maintained properly, it would be a popular route to reach Sariska or Alwar and would also take some pressure off the busy highway. 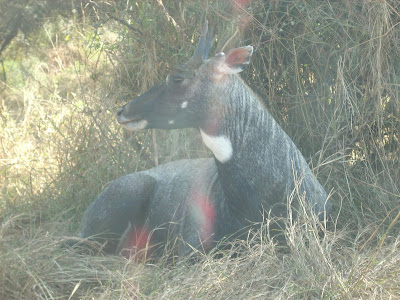 Next morning we headed for the park. The visitors are allowed to drive on a 21 km long stretch of metal road. I do not understand why the road was in such a state of neglect and disarray. One side of the forest was closed for public as it has been priviledged to receive and house Sultan and Rani, a pair of young tiger under a scheme to reintroduce tiger once again in Sariska. We were told that the pair has electronic collars and chips to monitor their movements. I wondered why collar these beasts; we should put collars and tags on to the poachers so that they do not approach even the vicinity of any forest. We could sight eagle, owls, herons, partridges, quail, wild boars, cheetal (spotted deer), sambhar, neel gai etc in plenty. And peacocks were in abundance. The males were not so handsome at this time of the year, after their annual shedding of plume and feathers around Deewali time. We saw one solitary mongoose who must be at least 4 times larger than the one we normally see. The road ends at Pandupole which has a Hanuman temple. No prize for guessing that Pandupole must be connected to 5 Pandav brothers. They are believed to have visited this forest and met Lord Hanuman here. 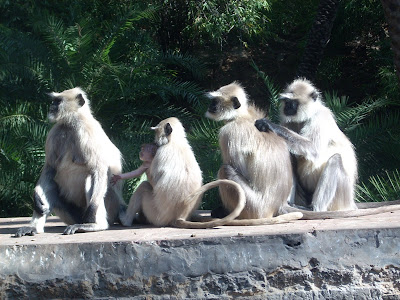 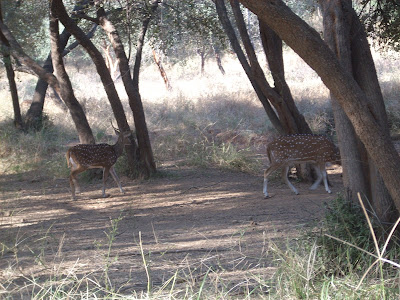 The vicinity of temple had a large population of monkeys and langurs. Their acrobatics and playful acts were a source of joy I could watch for hours. One female langur had just been blessed with a baby and was fondly grooming it. She was joined by three other females of the family who took turn in fondling and grooming the baby who was getting restless with each passing minute to get out of their clutches. It was a beautiful sight. The head of the family, a lone alpha male, showed on interest in the new arrival and was just lazing around in the sun. A large group of monkeys was active inside the temple compound. I was fascinated by their drinking water from the tap. I was wonder-struck when one monkey maneuvered the tap by revolving the knob anticlockwise to drink water, and then closed it after quenching his thrust. It was now turn for the next; however, before it could finish, the guard came with a big stick and chased it away. The monkey had to run away leaving the tap open. But this guard, the man, did not bother to close the tap. I am certain if the monkey had the chance to fill his quota, it would have closed the tap. We, the naked apes, have a lot to learn from our hairy ancestors in environment protection and resource preservation.
By Sudhir Khandelwal at December 21, 2008

Wow, such a descriptive post, with observations on human behaviour. I agree with you about the truck drivers being the best drivers on the road.
And the monkey sure is closer to nature and knows how to preserve it for its own use later; human beings know how to waste after consumptions.
Possibly in the coming week We will go to Rajasthan but Sariska was not on my agenda, maybe I can add this too.

Hi, Mampi. If we really wish to call ourselves global citizens, we need to mend our ways tremendously, and not feel shy in learning from others. It is time we understand that car, no matter how big it is, is just a means of transport and no longer a status symbol. What is your itinerary for Rajasthan?

Thanks Pradip, Abhijeet and Venugopalan for coming here and for your wishes. I too wish to convey you all on both the batches of 27th and 28th ISAE for a safe and successful expedition.

Great post Papa! I have fond memories of our trip a long time ago! The episode of the monkey and the water tap holds a sobering lesson for the human race.