While the mental health professional bodies have shied away in taking up the issue of decriminalizing homosexuality, a team of Delhi’s bright young lawyers has committed its time and legal acumen to challenge the archaic provisions of Section 377 in the Delhi High Court. Indian Express profiled these lawyers in its print and electronic editions at:

It makes no sense. Corporate lawyers in India are paid upward of Rs 12 lakh a year. Why, then, should India’s brightest young lawyers - the world at their feet - be working at minimum wage, even free, arguing for the decriminalization of homosexuality in India? It just makes no sense.
Section 377 of the Indian Panel Code, drafted in Victorian India, criminalizes “carnal intercourse against the order of nature”. This has been interpreted to include sodomy, effectively criminalizing homosexuality. A century and a half later, the law is being challenged in the Delhi High Court. The petitioner, Naz Foundation, has challenged it on medical grounds, arguing that it prevents India’s gays, many of whom are at high risk for AIDS, from receiving treatment. The other group challenging the law, ‘Voices against 377’, relies more on human rights, contending that Section 377 violates the constitutional rights guaranteed to homosexuals. The court’s judgement is expected anytime now.
A team of highly educated young lawyers has committed its time to this case. Chief Justice A P Shah of Delhi High Court told the petitioners, “You seem to have gathered much medical evidence that homosexuality is not a disease, unlike the other side’s lawyer, who argued in court that ‘homosexuality is a matter of fun’.” 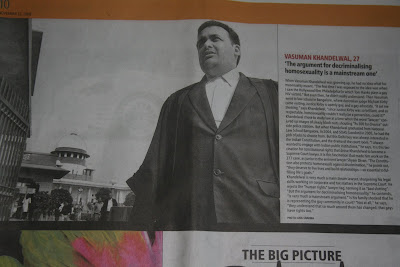 While, Vasuman Khandelwal (27) is a hard-nosed Supreme Court lawyer, driven to the case by the Constitutional obviousness of the cause, the other three, Shivangi Rai (27), Shrimoyee Nandini Ghosh (29) and Mayur Suresh (28) are more activists.
Shivangi, (a graduate of Indian Law Society, Pune) lawyer of the petitioner Naz Foundation, is fighting Section 377 in the Delhi High Court on the grounds that Section 377 violates the fundamental right to privacy, right to dignity and right to health of homosexuals. Shivangi values her legal training. “We are not just activists; we are first and foremost lawyers, so we use our legal skills to make a persuasive case in the court, not just shrill rhetoric.
Shrimoyee (LL M from University of London) is associated with “Voices against 377” fighting for decriminalizing homosexuality. Why homosexuality? “I think that as a feminist, I understand the sheer wrongness of Section 377, and how it stigmatizes an entire community. Discrimination on the basis of identity is something that feminists can easily relate to.” She further says that Section 377 is just a violent, archaic, incoherent law that needs to go.
Mayur, (LL B from National Law School, Bangalore and LL M from Columbia University), is using his legal arsenal to work in Delhi as a litigator, and is currently combating what he terms one of India’s most unjust laws. As a gay lawyer, he feels lawyers play an important role in the wider movement in the country fighting for the rights of the lesbians, gays, bisexuals and transgenders. He finds that his skills as a lawyer help him to take a bunch of facts, cut out the faff, and present a legal argument that will stand scrutiny in court. “We are able to make a medical argument and a human right argument, but what about love, why is it the state’s business to regulate love?”
Vasuman (a graduate of National Law School, Bangalore and LL M, SOAS, London) says that his interest in Indian Constitution and court room drama drove him to become a Supreme Court lawyer. “The Constitution protects homosexuals against discrimination; they deserve to live lives and build relationships - so essential to fulfilling life’s goals”. Vasuman is a very much mainstream lawyer, sharpening his legal skills working on corporate and tax matters in the Supreme Court as junior to the eminent lawyer Shyam Divan. Vasuman rejects the human rights lawyer tag, terming it as ‘bad slotting’. He contends, “But the argument for decriminalizing homosexuality is very much a mainstream argument.”

When we were in San Francisco this summer, Pride Parade was organized on the last weekend of June. I wanted to go there more for curiosity than anything else. I was curious to know what these guys do in such parades. Do they make fun of themselves or of the world? Or it is a show of their camaraderie and bonhomie! Or is it show of revolt against the callous and non-understanding world, activism or politicking? Or it was a show of strength to fight for their rights and rightful place in the society. 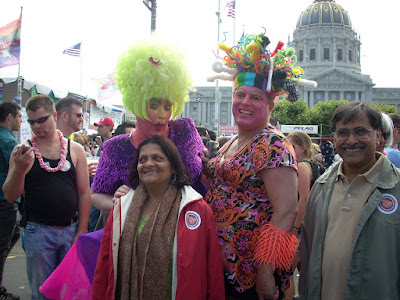 We all went to the city centre where this parade was being organized. In fact it was a big ‘mela’ where people of all ages and all hue and colour had assembled. The parade with colourful floats had all assembled at the city centre. There were many stalls enrolling members to various organizations. You did not have to be LGBT (lesbian, gay, bisexual, transgender) to get the membership. Many stalls were for health promotion regarding HIV and AIDS. And of course, there were numerous food stalls. People were in festive mood with colourful dresses. Of course, some were defying the evening chill and were in their birthday costumes, but only a few. Men and women in fancy dresses were in great demand for getting photographed with. 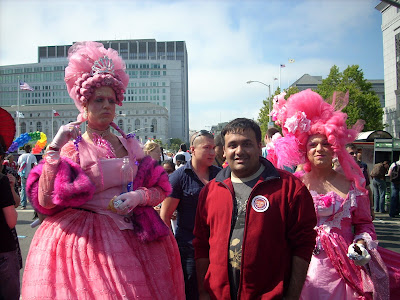 We also approached a few who gladly obliged us, and on knowing that we were visitors from India, very warmly welcomed us and wished us a pleasant stay at San Francisco. For sure, there was no obscenity or lewdness in the whole show. We stayed there for nearly two hours and never felt awkward.
On our return, we learnt that in India too coordinated pride events were organized on June 29, 2008 at Delhi, Bangalore, Pondicherry and Kolkata where about 2000 people turned up. The pride parades were successful, given that no right-wing group attacked or protested against the pride parade, although the conservative opposition party BJP expressed its disagreement with the concept of gay pride parade. The next day, Prime Minister Manmohan Singh appealed for greater social tolerance towards homosexuals at an AIDS event. On August 16, 2008 (one day after the Independence Day of India), the gay community in Mumbai held its first ever formal pride parade (although informal pride parades had been held many times earlier), to demand that India's anti-gay laws be amended.
By Sudhir Khandelwal at December 12, 2008

Thanks for sharing.
We need to be living in a more tolerant society governed by a more tolerant law that gives freedom to every choice as long as it is not harmful to others.

Yours is a cool blog, and a Butterfly awaits you on my blog.
Please make it convenient to visit sometime.
No three cups of chai to offer, just a cute little butterfly.
Regards

Thanks, Mampi, for summarizing need of the hour. Not sometimes, I visit your blog regularly. Btw, chai is on me.