Three Cups of Tea: One Man’s Mission to Promote Peace … One School at a Time

Let me be honest. I must confess: when I picked up this book, I wanted to read it to improve on my knowledge of topography and geography of Karakoram region and the people living there. I also wanted to know a little more about K2, the savage mountain, which has no other name. Though K2 is the second highest mountain (8611 meters or 28251 ft) after Mount Everest, I knew very little about it. Having lived in Nepal for some time, and with my fascination for Himalayas, I managed to read a little about Mt Everest, and like most people, I equated Himalayas with Mt Everest only. It is also a fact that much less is written about K2 since it is believed to be the world’s most treacherous and dangerous mountain, and technically most difficult climb. Far less number of mountaineers have attempted and succeeded on K2. I have personally heard Everesters who admit that Mt Everest is more about physical fitness and less about technicals (but you must still have sound technical abilities of rock climbing, snow and glacier walking, negotiating crevasses, rescuing etc), but K2 remains formidable as it tests a climber in all aspects of summit climbing. As of now, only 305 people have successfully ascended K2, compared with about 2600 who have summitted more popular Mt Everest. Mortality rates continue to remain high on K2.
I also wanted to read the book since it was about Pakistan and its relationship with Himalayas. Other than K2, I never associated Pakistan with Himalayas. But I was made aware of my ignorance in the opening pages of the book when I found out that in a comparatively small region of Karakoram, more than 60 peaks reside which are more than 20,000 ft high.

In 1993, a mountaineer named Greg Mortenson, drifted into an impoverished Pakistan village in the Karakoram mountains after a failed attempt to climb K2. He was rescued by a Balti. Moved by the inhabitants’ kindness he promised to return and build a school. Three Cups of Tea is the story of that promise and its extraordinary outcome. Over the next decade Mortenson built not just one but fifty five schools – especially for girls – in the forbidding terrain that gave birth to Taliban. His story is at once a riveting adventure and a testament to the power of the humanitarian spirit. Three Cups of Tea is co-authored by Greg Mortenson and David Relin and published by Penguin.

When I started reading the book, first I was captivated by the beauty and desolateness of formidable and merciless Karakoram region. However, soon I was flowing with Greg in his mission to build his first school in Baltistan and was periodically filled with thoughts of doubts, apprehension, fear and hope. It was a Herculean effort to raise money for his school in US even before the days of 9/11. He had begun his mission in 1993. He had no idea of how to raise money. People were generally not interested in the Islamic world; Tibet had remained a favourite cause for charity. He begins by writing letters. He had returned from his K2 mission not just as a failure, but completely broke. He sends 580 letters of plea for his cause. After an agonizing wait and some lobbying, he finally gets a single cheque, but it was worth twelve thousand dollars, enough to build one school in Baltistan. Even then, it was not easy; many people in the village thought their village had different priorities. Many suspected his motives. However, with time, persuasion, and patience he manages to win their trust and support. Like one village chief told him “Here, in Pakistan and Afghanistan, we drink three cups of tea to do business; the first you are a stranger, the second you become a friend, and the third, you join our family and for our family we are prepared to do anything…even die.”
Illiterate high-altitude porters of the region put down their packs (and giving up decent salary and benefits from expeditions) to make paltry wages wit him so their children can have education they were forced to do without. A taxi driver who chanced to pick Greg up at the Islamabad airport sold his cab and became his fiercely dedicated ‘fixer’. Former Taliban fighters renounced violence and the oppression of women after meeting Greg and went to work with him peacefully building schools for girls. Though he managed to build 55 schools in 10 years in the most formidable region of Pakistan and Afghanistan, he did not have a smooth ride. He was termed a CIA agent, was threatened to wind up his mission; clergy of a village issued a fatwa against him; and he was even kidnapped. Like a true missionary, he did not give up and persisted with his goal. His logic in those regions as well as in his own country, US, was simple: though the US was fighting terrorism, it was doing nothing to rehabilitate families or empower them. Very soon he had discovered in his mission that education of girls was key to health, peace and prosperity. Aren’t we in India familiar with the slogan ‘you teach a woman, you teach a family.’ 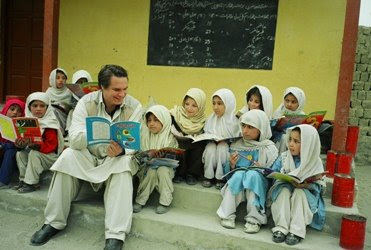 Some reviews of the book:

“As the US confronts Saddam Hussein’s regime in Iraq, Greg Mortenson is quietly waging his own campaign against Islamic fundamentalists, who often recruit members through religious schools called madrassas. Mortenson’s approach hinges on a simple idea: that by building secular schools and helping to promote education - particularly for – in the world’s most volatile war zone, support the Taliban and other extremist sects eventually will dry up.” (Kevin Fedarko, Parade cover story, April 6, 2003)
“In an age when every politician and talking head has little but rhetoric to offer for the seemingly irreconcilable mess of warfare and cultural conflicts wash in the Middle East and Islamic territories in Central Asia, Mortenson’s book is a stunningly simple story of how to make peace in one of the most beautiful places in the world: build schools for girls… his mission is a relentlessly positive one, and his ability to reveal the beauty and refuse to accept the brutal reality around him is an inspiring, heroic and at times even crazy pursuit.” The Bloomsbury Review

Three Cups of Tea is a beautifully written book about one man’s crusade against poverty, illiteracy and terrorism. Though sometimes it gets repetitive, but is still unputdownable. I shall recommend it to everyone who feels his/her life has been affected by terrorism
By Sudhir Khandelwal at December 04, 2008

Sudhir,
This post on this book comes at a befitting time.. Today, when all of us are worrying and asking what is my bit of contribution in the messy times, this book, Greg's work comes as a practical example. We need to start from that scratch.
Thanks for sharing. I had read about it earlier also. Ab toh parhna hi padega is book ko.

You beat me to the punch on this review.

I’ve become a HUGE fan of Greg Mortenson’s work. My interest in the book was initially piqued by Greg’s background as a climber and his travels to Asia. My fascination has lead to a genuine admiration for this guy and the work he has accomplished so far. I was lucky enough to see and hear him speak at a felicitation in San Francisco recently. I’m inspired, and someday, maybe someday, I hope to do more than just read a book and donate money.

I'm pleased to say that a friend of mine, Susan Roth, has illustrated a beautiful version of this story written by Greg Mortenson for children, Listen to the Wind. Please pass this on to people you know with young children.

Mampi, whenever you come to Delhi next, I shall be very happy to lend you this book.

Kush, make me a partner in your own venture.

Uma, pl give more details of Susan Roth's version. Will be happy to share with family and friends, and may be in some schools of Delhi.

Susan did the artwork which as you may know conveys half the meaning in a book for young children. The text is by Greg, and is the story of the building of the Korphe school, told in the collective voice of the children of Korphe. Listen to the Wind is being published in the US by Dial Books and will be released in January. Amazon is taking advance orders now.

Thank you, Uma for the info. I shall obtain this.

You know, I read the review too somewhere too-but you provided such a gowing review that I will definitely read it! Being a Geography student, it will interest me even more:)

Hi, Mithe; welcome. I visited your blog which left me wondering whether you were a student of geography or of literature.

A wonderful post of what one man can do. Beautiful words that I hope the book lives up to.
I have ordered it.
Robbo

Hi, Robbo; thanks for visiting the blog. I too visited your blog just now and am fascinated by your own spirit to work in the remotest part of Australia with Aboriginals. I shall certainly keep in touch with your blog to know more about the issues and other interesting stuff that you post.