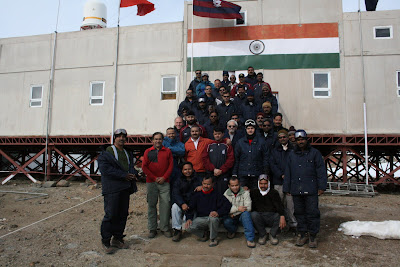 The Indian Antarctic Expedition celebrated its 27th birthday on 9th of January this year. It was on this day that M.V. Polar Circle brought the first ever Indian Antarctic Expedition to the shore of Antarctic continent. The Expedition comprised of 21 members, with 13 of them scientists and rest logistic staff. They all had undergone snow and ice training in the upper reaches of Himalayas. The Expedition was led by Dr S.Z. Qasim, the eminent scientist from the Deptt of Environment. The team had left Goa on the 6th December, 1981, after leasing Norwegian ice breaker, M.V. Polar Circle, and took 33 days to reach Antarctic ice shelf traversing 11, 000km. Its objectives were, establishment of an Indian base camp in Antarctica, initiation of scientific work in different disciplines of Antarctic science, and assessment of the logistics requirements for future Indian missions. After reaching there, it successfully established a base camp and hoisted the Indian flag. It initiated work on geology, geophysics, microbiology, meteorology and chemistry. It also established an unmanned Automatic Weather Station (AWS) in the Schirmacher Oasis region of Antarctica. After accomplishing its mission successfully, the first expedition returned to India on 21st February, 1982. India’s national pride was apparent in the statement that “the Indian success at the very first attempt is therefore recognized the world over as a remarkable achievement.”

It goes to the credit of Mrs Indira Gandhi who initiated the planning for Antarctic expedition. Indira Gandhi, despite her many domestic socio-political compulsions, wished a respectable status for India, not only in the developing world, but in the entire world. It is said that the entire planning for the first expedition was a closely guarded secret. It was only when Department of Ocean Development started looking for an ice-breaker for the launch of expedition that the world came to know of India’s ambition. Indira Gandhi had decided to send an expedition to Antarctica, hinting that India also might join the treaty. Although at the time it was not even an acceding party, India’s 1981 Antarctic expedition was the first sent by any nation entirely outside of the treaty framework. It scored points, however, with the treaty powers by stating that the expedition was “purely scientific”, that India had no territorial ambitions in Antarctica, and that India subscribed to the principles of the treaty. But before the expedition left, the Indian government notified other developing nations of its plan-in effect, testing the waters of developing world opinion. Consultative status in the treaty-and an accompanying scientific presence in the region-would have offered a great prestige value to a developing nation like India.

With the 3rd expedition in December, 1983, India established and successfully commissioned its first permanently manned station at Antarctica and named it Dakshin Gangotri on ice shelf; with this India obtained the membership of prestigious club, Antarctic Treaty. It however, started to sink in the ice and had to be abandoned. The work for India’s second station had begun at the Schimacher Oasis region in 1987-88, and the ninth expedition launched in November, 1989 successfully commissioned fully equipped winter station, Maitri. India is in the process of starting its third station, Bharti, at the Larsemann Hill area of Antarctica.

In last 27 years, India’s Antarctic programme has development successfully in initiating a number of major scientific work and in providing better facilities to the expedition members living in Antarctica for summer season or for wintering. It, of course, is fully centrally heated with 24-hour supply of power and cold and hot water. It has a number of scientific labs where work goes on throughout the year. Its telecommunication has improved tremendously over the time. Now through satellite facilities, one can communicate with Maitri any time of the day or night throughout the year. 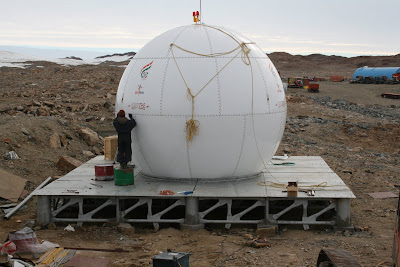 One important mandate of the 27th IAE, of which I was a member, was to erect Earth Station so that Maitri gets full time internet connectivity. The construction part of the earth station was completed while I was there. We all had toiled in carrying heavy construction material for this purpose. Our hard work has paid off when the station has successfully established link with the satellite and Maitri now has full time internet connectivity as well as television link. So members now enjoy net surfing like you and myself, and watch daily news and soap operas of their choice on TV.
Antarctica is now not such a desolate place as it used to be. Besides, sea-route, which till recently provided the only access to Antarctica, now we have regular flights from Cape Town, Chile, or Argentina landing directly into Antarctica. Indian expeditions are also now using air route regularly. However, both these route operate only during Antarctic summer. There are attempts now by Americans to land their Hercules C-130 during nights of icy winter of Antarctica.
More and more people are now choosing Antarctica for their adventures, like reaching South Pole skiing all the way, or using huge kites. Cult swimmers or long distance swimmers are now swimming in the iceberg choked freezing waters of Antarctica. You are considered to have achieved the distinction of Antarctic swimmer if you manage to swim 1 mile (1.6 km). Many tourist agencies are now operating packaged tour to Antarctica regularly. People believe that in very near future Antarctica would soon be a popular holiday destination for people with all amenities. 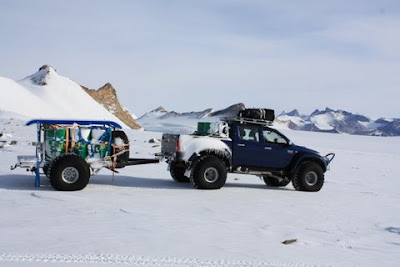 Now Toyota has introduced modified cars which can negotiate Antarctic blue icy surface and its crests and troughs. These have very large sand-tyres (about one and half feet wide) and a huge ground clearance. The Arctic Company has been using these vehicles successfully for some time now in Arctic, and their introduction in Antarctica will change the face of travel within Antarctica.
By Sudhir Khandelwal at January 17, 2009

Very interesting information. But if Antarctica becomes an oft-visited destination by the earthlings, they will pollute it badly.
God save Antarctica.

Mampi, yeah, we can certainly take refuge in the Almighty God. But would God really want to intervene? Man's technology is certainly not keeping pace with man's greed, desires, and consumption. See, what has happened at the Mt. Everest, tons and tons of debris is lying there!

Can private citizens plan trips to antartica or is it not feasible... I am from india

Dear Sudhir,
Further to your permission to translate some of the posts on your blogsite, I would be translating this blog "Maitri Celebrates Birthday". Thank you for your prompt reply. Regards.
Mangesh Nabar

To Anonymous: yes, private citizens can visit Antarctica, though the costs are quite prohibitive. Kindly look at some of the google ads on this blog. Also look at the website of ALCI which also organizes package tourist groups.

Thank you, Mangesh, for your efforts. Good Luck