VINNY TAKES TO THE BLUE SKY ONCE AGAIN


(Leela read the "Nesting on no man's land", stories on Antarctica, in the New Indian Express and shared her following experience with me over email. I am reproducing her experience and photographs with her permission) 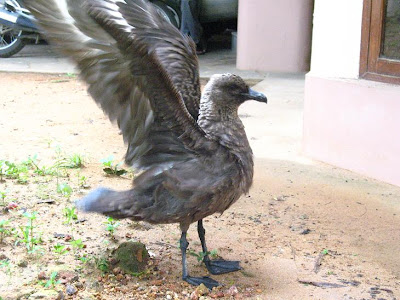 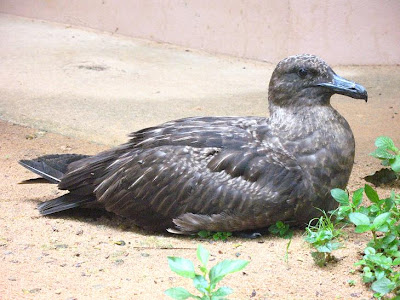 I am Leela Latheef from Trivandrum, Kerala. In ‘The Hindu’ dated 11-1-09 I read your article on extraordinary Antarctica, a place which has always fascinated me! And your article did quite fill up my never dying inquisitiveness on the South Pole. But more than other things, your story caught my attention because of Shiv and Uma who held your perpetual attention while you were there.
Not only because of your description of the South Polar Skua but also for the fact that on July 3rd 2007 I had received a call regarding a bird caught at the beach by some people when it was on its way to be killed and sold off by some fishermen. We run the Trivandrum Chapter of People For Animals [PFA] here and went in our ambulance and brought it home. It certainly looked a water bird but not like anything we had seen or known before. But nothing could stop us from admiring this strange guest who showed the least concern being in a new place amongst strangers! It even pecked at my dog when she went too close to it out of curiosity! I named the bird Vinny.
Vinny wanted to be in water, we felt. We provided her a large plastic basin first, in which she happily dipped though it was too small for her. So we quickly replaced it with this very large rubber tub meant for children. And the sight of Vinny making the best out of it was something to watch! She had a rollicking time! Again and again she would dip herself and then flap her wings and spread it and we marveled at her beauty! Meanwhile I started contacting bird experts to find out exactly where she belonged to as we still had no clue as to what kind of bird she was. Net surfing was also done at the same time. Soon things began to fit into place which was shockingly pleasant surprise news for us!
Suresh Elaman and Sushanth, known ornithologists, came over and took no time in educating us that Vinny was none other than The Brown Skua, and that she had come all the way from South Pole!!! And that, after flying a very long distance, non-stop, maybe it landed on as a stop gap on our beach; this also meant that it would resume its journey soon. It will be no exaggeration if I say that we were totally bowled over by this news. We felt privileged! We had a guest with us coming all the way from Antarctica! I almost felt connected to Antarctica. Vinny soon made into the Newspaper! It seems the last sighting of a Skua in Kerala was way back in the 1930s in Kozhikode. I do remember that Vinny was described as Katharacta Antarctica while you had described your skuas as Katharacta McCormick. I wonder if it is one and the same kind of bird.
On July 13th Vinny flew away. Though very sad we were relieved that it took to the blue sky once again. We hoped and prayed that Vinny reached her actual home. And we were left wondering whether she was bound to the South Pole! I am sending you the snaps taken when Vinny was with us. It would not explain much if I say that I still miss her. Sometimes I am still left wondering whether Vinny was a dream but then I chuckle at my own self when I realize that an extraordinary guest like Vinny happens just once in a person’s life time!
By Sudhir Khandelwal at January 23, 2009

Absolutely stunning story. Left me with goosebumps. Leela has told this story in a very gripping way too.

We wish Vinny, her friends, and all the protectors of Vinny and her likes all the success and best wishes.

Wish i could thank you enough..! But i know that i won't be able to do that..! .Seeing vinny on your blog was, to me, like she has reached to where she actually belongs...I feel grateful to you for giving space to my words and pictures of vinny in your beautiful blog..Looking forward to more of your very interesting articles..
(by Leela on email)

Mampi, isn't it marvellous how people get connected! Leela's work with animals gives her so much satisfaction and pride, and she does make a difference to this world.

Leela, all credit to you; in fact I feel priviledged that you wrote to me and then allowed your story on the blog for others also to read. Thank you!

Dear Sudheer,
I am very keen to read your blog whenever I get time to surf. I am tempted to translate some of them in Marathi subject to your permission, since many Marathi readers of newspapers and periodicals do not either know your blog or do not take pains to surf. I would like to inform them your blog site by translating one of your posts. Please reply soon.

Mangesh, give me your email id so that we could discuss it further

Dear Sudheer,
my email id is mangeshnabar@gmail.com . You may discuss on this matter as per your convenience. Thanks.
Mangesh

The story is quite exciting and sends me back to Antarctica.
The Brown skua is said to be commonly found as far up north as India. It is the Antarctic skua that is confined to the antarctic and subantarctic region. It is darker in colour. The one we saw at Maitri was brown, but I cant say which variety it was since I have not seen both the varieties.

Dear sir,
I am visiting your blog today for the first time. It is indeed a very well maintained blog. No wonder it is so popular.
I will go through the entire document soon.