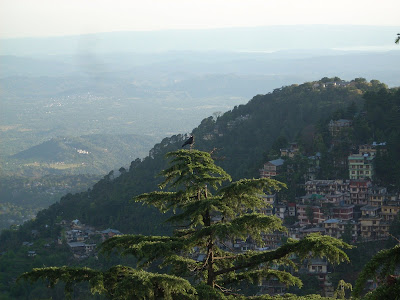 It just occurred to me that Dharamsala happened to be one of those towns where I have gone a few times. Of course, Dharamsala is a hill station, but mercifully it is not in the same league as Shimla, Nainital or Mussoorie. For more than 20 years now, I have stopped going to the ‘mainstream’ hill stations. They are not better off than Delhi during the tourist season – hot and humid and civic amenities breaking down. And then there are traffic jams, and familiar food corners selling chholey-bhature and jeera chow-mein fried in ‘pure desi ghee’. You hear the same bollywood numbers blaring out from the cars of puppies, and then also bump into the same people whom you assiduously wanted to avoid back home. These hill stations, and Manali included, remind you of Lajpat Nagar or Sarojini Nagar. But Dharamsala is different. It is less frequented by hill-station hoppers, and the presence of Tibetans with their rich heritage of culture, politeness, crafts and variety of food make it an interesting place. Though over the years, its character too has undergone sea change, yet I find it a charming place. So last month when I got a chance to go to Dharamsala for a meeting I could not resist. 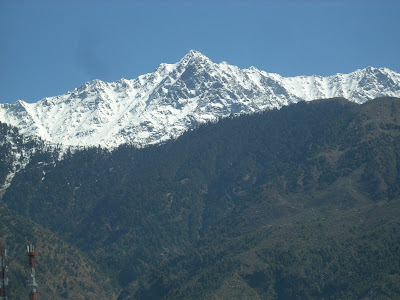 The first time I visited Dharamsala was way back in autumn of 1961 or 1962 in a trip organized by our school for young students. Dharamsala had suddenly shot into fame by the Dalai Lama having been given sanctuary there by the Government of India after having escaped from Chinese oppression in 1959. Our teacher goaded us to trek to His seat from the bus stand, but we could not have an audience with him as he was away to Delhi for a meeting. Other than that, what I remember of Dharamsala from that time were fruit laden trees of apple, walnut and almonds. Before that I had never guessed that walnut and almonds grew on trees, and were not mysteriously procured by the store-wallah for our consumption. 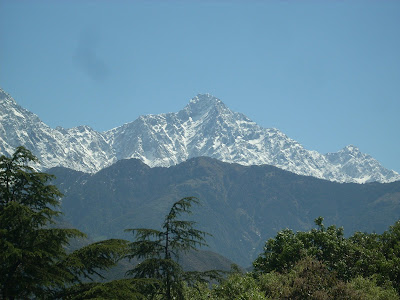 Next time our visit to Dharamsala was in 1993. During the summer holiday, I was looking for an easy place to trek where we could go as family without testing our stamina or skills. Deepak suggested Triund and Ilaka glacier above McLeod Gunj. We drove via Chandigarh, Una and Kangra. Drive to Chandigarh those days used to be an easy one, and after Una, it was very pleasant and scenic. There were many places to be seen on our route - Bhakra dam, Anand Pur Sahib, and many temples devoted to Durga. If Uttarakhand is the land of Lord Shiv, Himachal is the abode of Goddess Durga. Thus, many famous and deeply revered temples like Naina Devi, Brijeshwari, Jwalamukhi, and Chamunda all lay on this circuit. Though I am not a ritualistic religious person, but if there is a famous or historical temple en route, I might as well have a darshan. But children found it too much; I vividly remember Kush telling me, “Dad, this is not my idea of vacation”. After having spent night at Kangra, we drove next morning to McLeod Gunj. McLeod Gunj has some very popular Tibetan food joints serving authentic dishes. And to cater to Western tourists, there are many bakeries selling delectable cakes and pastries. I was too impressed in having ten different kinds of tea available even at an ordinary dhaba. After spending a night or two at McLeod Gunj, we drove further to Naddi village where the metal road ended. There were a few inexpensive guest houses there where we finally stayed for next few days. We trekked to Triund and Ilaka glacier from there, which was an easy trek. We returned via Palampur and Joginder Nagar; Palampur was very scenic while Joginder Nagar was nostalgic reminding of Devanand and Suchitra Sen in ‘Bambai ka Boboo’.
This time I found McLeod Gunj grown very much. Many tourist hotels have sprung up, and there are far too many shops catering to the tourists. Most tourists at this time were westerners, including some famous ones. 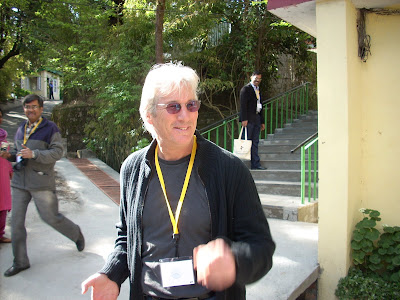 And now there is a direct air link between Delhi and Kangra. We as a group had flown there. We visited some famous Tibetan institution during our stay. The weather in April was perfect. For our return while we were waiting at the airport, we were informed that the Delhi-Kangra flight could not take off due to technical snag. So we decided to hire a cab and return by road. Though I don’t like the idea of driving/being driven at night on Indian highways, we did not have much choice. So we took the plunge, and took a 12-hour road journey all through the night. Needless to say, I could not even doze off, having one eye on the road and the other on the driver. We reached safe and sound, and being Sunday, could rest for the whole day.
By Sudhir Khandelwal at May 10, 2009

Thanks for your visit, Miracela.

I soooooooo enjoyed this post after my own visit to Dharamsala.
How did I miss this one in routine, I am still amazed at.
Nyway, der aye, durust aye.