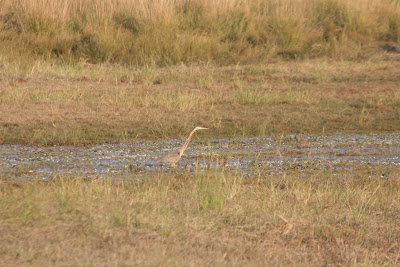 Though for most of the visitors, the single most important sighting would be of a tiger, however, this park like most of the other wild life parks, has many other attractions in form of animals, birds, and many kinds of plants and trees. And then, Ranthambore Fort in itself demands an independent visit.
The other wild life that we could see during our visit were spotted deer, sambhar deer, neel gai, wild boar, monkeys and langurs, and crocodiles. The spotted deer are among the most beautiful deer in the wild. It is so graceful in its walk, and runs almost effortlessly. We could see many small and large herds of spotted deer, and each herd any many adult males and females. However, in case of sambhar, there was one adult male with many females in a single herd. Due to its antlers, it looks majestic and formidable, and walks upright showing off its antlers: it is for no small reason that it is popularly known as ‘ghamandi barasingha’. There were large number of monkeys and langurs all over the park; the antics of the young ones were a joy to watch. You could see them playing and making pranks on one another for hours.
We could also see a large number of birds. The most common, of course, were peacocks and tree pies. Peacocks at this time of the year were not in their full attire of colourful feathers after having shed their heavy plume around Diwali time. The males were not in their dancing mood also, this being not their mating and breeding season. The tree pies were everywhere and the boldest creatures in the park. It, being an opportunistic bird, would come very near visitors in hope of some food. Many people were feeding them nuts and bread from their hands. We also could spot brown fish owl, spotted owlets, black vulture, whitebacked vulture, sand pipers, snipes, quails and partridges, kingfishers, woodpeckers, lapwings, and many other water birds.
Thus, it was a very satisfying visit to Ranthambore, worth visiting again and again.
By Sudhir Khandelwal at December 29, 2009

Hi, Mampi; I hope you are able to go there soon.