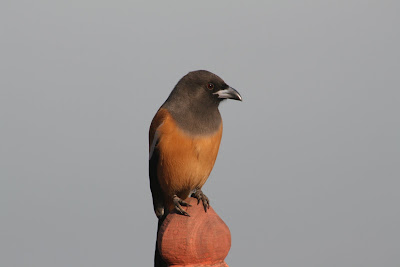 Finally we made it to Ranthambore, the sanctuary we had been longing to visit for a long time. The sanctuary had its reputation for having the friendliest of tigers, and visitors had returned not disappointed. The Lord of the Jungle had been obliging visitors to its sanctuary by giving them an easy audience. May be, that has been the precise reason for its continuously dwindling numbers everywhere including Ranthambore. The greed of man had exploited the easy and friendly nature of tiger to kill it for flimsy reasons, the most laughable being that its mortal remains are potent aphrodisiacs. It should have preserved its savage nature to preserve itself and for preservation of its progeny in the country which prides itself in having tiger as its national animal.
We had seen tigers in our first visit to Kanha, but the Lord had eluded us in many other popular sanctuaries. Now we know why. The Lord was not acting ‘pricey’, but because it had ceased to exist in many of the sanctuaries. It is nothing less than a national shame that our National Animal is not spotted in the wild but is seen more frequently in the zoo. However, over the years I have come to realize that if you are visiting a forest, go for many things other than tigers; if you happen to chance upon a tiger, it is your bonus. Fortunately, many of the forests in India still have many other attractions left, though we made a total mess of Project Tiger and at the same time neglected everything else in the name of tiger. So when Kush last month suggested planning a visit to Ranthambore, we all jumped at the idea. Since time was short, we decided to go there by train rather than driving all the distance by car. There are a number of trains which go to Sawai Madhopur from Delhi, and the park is just 11 km away from the station. It is a small town and has many hotels and guest houses catering to all kind of pockets and taste.
We were lucky in our first ever visit to the Ranthambore National Park as within first 15 minutes of our entering the park we made a sighting of a tiger. It was a young but fully grown female tiger, which we would later find, called T-17. We saw it hidden behind a growth of bushes looking intently at a herd of spotted deer (chital) and ready to ambush it. And suddenly she stood up, came into open and charged towards the deer. Alas, it was unsuccessful, as tigers are successful in only 1 out of 5 chances. The herd of deer was successful in escaping to safety, and we were successful in sighting our first tiger at the Ranthambore National Park. T-17 is daughter of a world famous tigress, Machhli, who has been heroine in many stories on Ranthambore and also the leading actress in a number of documentaries. For next 45 minutes she played hide and seek with us, and then decided enough was enough, and disappeared into the river bed. What a majestic creature she was; I can not forget her carefree gait and attitude, and the total indifference and disdain she reserved for us. But even that was welcoming coming from the Lord of the Jungle.
By Sudhir Khandelwal at December 29, 2009