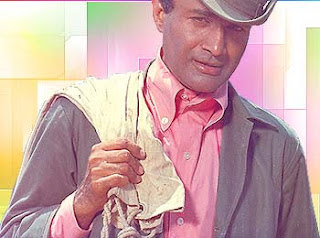 No, no, no one from Bollywood has ever come to Antarctica. No feature film has ever been shot here from India. It is high time though with commercial flights now available, someone must think of Antarctica as a possible location for at least an item number or a chase on the snow scooter for the last scene. Bipasha, Shilpa or Rakhi will win many accolades doing an item number on the frozen ice in their glamorous lingerie. Salman can have exposure of his lifetime and can expose himself to his heart's content satisfying his exhibitionism for this life at least.

In a recent cultural evening, Casper Johnson penned and presented a skit when bollywood thinks of a movie in Antarctica. And who can be such adventurous hero-producer-director-storywriter (all combined) other than our evergreen Dev Sahib? So after numerous flops and on the verge of bankruptcy, Devanand is desperate to give a hit. We all know his penchant for weird story and locales for his films. Realizing that either he himself or other producers have already exhausted known locations, he hits upon an idea of having a film shot in Antarctica after watching 'March of Penguins' in a TV programme. He looks, as always, for a new face which he gets dime a dozen. However, he must give this time a sure winner, so he has to rely on old wine too. No one would fit the bill other than our dream girl, Hema. Does not she look glamorous in a recent tear jerker Bagbaan? She agrees in spite of Dharam forbidding her. He is still smarting with the success of Amitabh-Hema having wonderful onscreen chemistry. Dev Sahib wants a multi-starrer this time. After short listing many of the yesteryears' sure winners, he zeroes on to Raj Kumar. Raj Kumar agrees for a price not in terms of money but in terms of footage and camera angle. He also wants generous supply of scarves. Dev Sahib has no choice but to agree; after all, HE IS RAJ KUMAR. He also approaches Rajani Kant who agrees too charging nothing keeping his image of a large hearted person and winning many more fan following. After signing other supporting staff, Dev hires a ship and the unit sails towards Antarctica. They reach Cape Town where they have good time since there is still some fan following left there for Dev Sahib. So far so good. The Unit slowly marches forward and reaches latitude of 40 degrees little realizing the risks of 'roaring forties'. The ship rolls and pitches, and the entire staff is rolling on the floor. Everything is tipsy turvy. The Unit revolts against Dev Sahib in not being transparent and not providing enough information on the risks and dangers of such a journey to Antarctica, and not providing with enough insurance cover. Dev Sahib is also miserable having lost many of his implants in rolling and pitching of the ship. With a broken heart he agrees to return. He reaches Goa and waits for the return of the members of Indian Antarctic Expedition. He salutes them and acknowledges that the scientists and logistic staff of the IAE are the real heroes of India while Bollywood has only celluloid heroes.

Chitra adds: Your bollywood story didn’t have an end; it has to be 'all's well in the end'. Some hero has to do the rescue act and save the ship and win the heroine, Hritik Roshan or Akshay Kumar will fit the bill.
By Sudhir Khandelwal at January 21, 2008

You are selling out and pandering to the crowd, now that you've become famous.