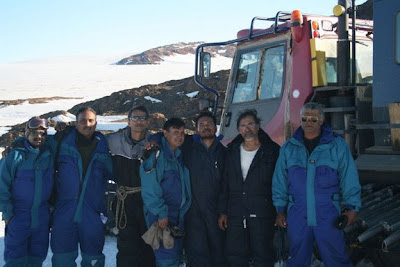 Whenever I see Niyas, I find him looking at me with hungry eyes. You see, he is the designated hair designer for Maitri station. He grooms members on request and is always on demand. He advises people what hair style would suit their physique. Growing hair with weird hairdo is also a regular hobby with wintering members. Most members during some time in their 15-month long sojourn indulge in a hair style which they could not or would not do while at home. Most common is freestyle when you just let hair and beard grow with no attempt to stylize it. It lasts till the member has collected enough number of photographs and one particularly with a turban to get Sikh appearance. I think the idea comes from bollywood heroes who in their short or long career sport a Sikh appearance at least once in a film to affect a disguised look. Another common is to shave off hair from both sides leaving a 3 inch wide terrain in the middle. Other common styles are shaving off front half of the head or to have a Yule Bryner or Amrish Puri look or to have an alphabet (usually the first letter of their name) designed on their head. During 18th expedition, Mr SSN did not cut hair or shave for entire 15 months. When he reached India with a free flowing hair everywhere his young son, who had come all the way from Delhi to Bombay to receive his dad, refused to recognize him when Mr SSN came out of the airport. Though I am here only for summer period, this year many members of the 27th team would be completing four a half months before they reach Indian shores. I am one such person and hence I am utilizing this opportunity to grow my scalp hair. I am sporting French cut beard, while my scalp hair would grow enough for a pony tail by the time I reach Delhi.
By Sudhir Khandelwal at January 19, 2008