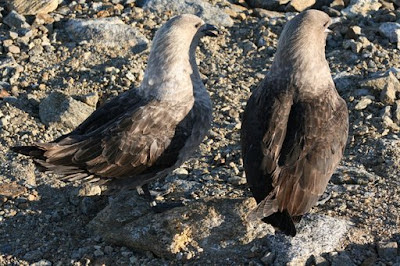 Unfortunately the chick did not survive. I myself discovered it under some stones away from the nesting area. I felt very sad and could not do anything. I just sat there on a stone praying. I had wished that both chicks should grow and fly away from here to their distant destination. I am not sure what caused its death. It could not have been due to lack of food or weather. There is evidence of availability of plenty of food; there are remnants of freshly killed snow petrels (skua's pet game bird) strewn all over. So far weather has also not been too inclement. I wonder whether its elimination was through the process of natural selection. It is known to occur in case of Adelie penguin when it lays two eggs. It selects the fitter chick to survive in a very practical but merciless manner. I shall tell you its story some time.
I have named the surviving chick 'Om'. Shiv and Uma are no longer hostile to my presence. They do not issue any threatening or alarming calls. Om gets restless to my presence which I try to keep bare minimum. I wish that it remains hostile to my presence and grows up with its all natural and wild instincts intact enabling it to survive and thrive in this hostile world.
Shiva and Uma, past entries-