India and the Antarctic Treaty 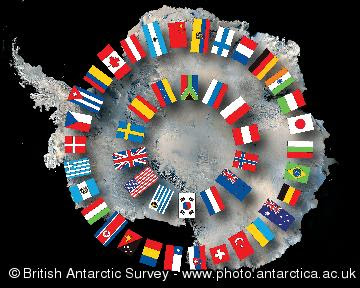 The Antarctic Treaty has some very interesting history in its signing in 1959. India's role in the Antarctica is also interesting since 1957 though its expeditions to Antarctica began only in 1981, and it became its voting or consultative member only in 1983.

The Antarctic Treaty was signed on December 1, 1959, and took effect on June 23, 1961.
Twelve nations signed the historic Antarctic Treaty in 1959 soon after the Inernational Geographical Year (IGY): Argentina, Australia, Belgium, Chile, France, Japan, New Zealand, Norway, South Africa, Soviet Union, United Kingdom and United States. Germany and Poland attained voting, or consultative status under the treaty from 1961. India and Brazil became the fifteenth and sixteenth nations with full voting treaty parties in September, 1983.
Antarctica had become a zone of conflicts in 1920s only when many countries began to claim large areas of Antarctica as their own. There were instances of armed conflict. Some stations were also burnt down. I have already told you (Naming of Schirmacher) that Hitler also began its ambition of gobbling up large part of Antarctica in 1938 only but was prevented from entering the fray on any serious note with the start of World War II.

Diplomats and politicians of claimant countries began negotiations soon after the WW II to come to some agreement in exploiting the potentials of Antarctica. However, an amicable agreement eluded them till Soviet Union managed to successfully launch its Sputnik, the first orbiting artificial satellite on 4th October, 1957. Sputnik demonstrated to the astonished Allies that the Soviets had the capability to send rockets over intercontinental distances. Besides its impact on Western defense strategy and foreign policy, Sputnik made Southern Hemisphere allies nervous that the Soviets may also exploit desert like conditions of Antarctica for nuclear purposes. Suddenly, their internecine disputes in Antarctica were dwarfed by the common fear of a Soviet military presence there. A formal accord among nations, including the Soviet Union, renouncing military activities there seemed the only way to forestall a costly arms race.

In 1956, and again in 1958, India had suggested that the United Nations take up Antarctica. Indian PM Jawaharlal Lal Nehru had initially proposed, and then dropped, his suggestion that the UN take up the Antarctic question. The claimant states successfully dissuaded India from pursuing the move further.
In September, 1983, the twelfth consultative meeting in Canberra, Australia opened with participation of its 14 consultative members. These 14 parties admitted two more-India and Brazil. These two countries did not share the original treaty nations' historic interests in Antarctica. However, both were considered large and politically influential developing nations which had sent recent expeditions to Antarctica indicating enough scientific interest in the region to meet the requirements of Article IX, the treaty's test for full membership.
In 1981, the government of Indira Gandhi decided to send an expedition to Antarctica, hinting that India also might join the treaty. Although at the time it was not even an acceding party, India's 1981 Antarctic expedition was the first sent by any nation entirely outside of the treaty framework. India leased a Norwegian icebreaker, the Polar Circle, and assembled a team of scientists led by the Department of Ocean Development. They trained in the high altitude of Himalayas known for bad weather. The Polar circle, with a predominantly Indian crew, sailed from Goa to December 6, 1981 and reached the Antarctic coast on January 9, 1982. There the team constructed a weather station, carried out radiation and magnetic surveys, and planed the Indian flag. It called the base Dakshin Gangotri. The following season a second Indian expedition returned to Antarctica, where it collected enough data to enable the setting up of a permanent manned station in its third expedition in 1983.
If the Gandhi government had clear motives, they were not apparent to the outside world. India national pride was apparent in the statement that "the Indian success at the very first attempt is therefore recognized the world over as a remarkable achievement."
The Gandhi government was deliberately ambiguous towards both the treaty group and the developing world. It scored points, however, with the treaty powers by stating that the expedition was "purely scientific", that India had no territorial ambitions in Antarctica, and that India subscribed to the principles of the treaty. But before the expedition left, the Indian government notified other developing nations of its plan-in effect, testing the waters of developing world opinion. Consultative status in the treaty-and an accompanying scientific presence in the region-may offer great prestige value to developing nations.
India's actions, therefore, may foreshadow the future in Antarctica more than all the law papers combined. In 1981, India was the only major nation looking south across the ocean toward Antarctica that had no historic presence there. Nehru tried to introduce the subject of Antarctica in the United Nations at the time treaty was being negotiated. His remarks at the time suggest that he was more concerned with keeping the peace than with elaboration of Third World rights over Antarctica's mineral and oil potential. India's expeditions to Antarctica indicate the government is capable of major scientific undertakings. Its Antarctic programme may be but the latest step in India's efforts to secure recognition as a serious technological power: it has launched its own satellites, detonated nuclear devices, and it has expanded its oceanographic and offshore petroleum explorations.
(Reference: The Seventh Planet: Antarctica in a Resource Age (1985). Deborah Shipley; Resource for the Future Inc; Washington D.C.)
By Sudhir Khandelwal at February 13, 2008