Seasickness Is No Fun 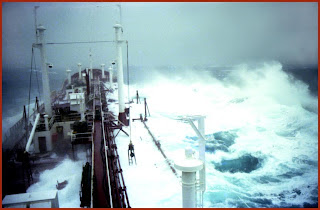 The sea continues to play truant. It was relatively calm this morning, but again since the afternoon the wave seem to have the grade of Force 8 at least with wind speed going around 35 knots, waves moderately high above 5 m and foam everywhere. There has been considerable rolling and pitching now, more pitching. So far I have felt OK for the entire day, but now I am doubtful if it remains like this for some more time.
This morning no breakfast was prepared. Yesterday lot of food was wasted. Even eggs and fried fish which are favourite items with the members had to be trashed. Hence this morning breakfast was done away with. The hardier ones were requested to help themselves with toast, cereals and whatever hot or cold beverage of their choice.
The ship is literally in the eye of the storm. The storm is building up not so much due to the wind but by three or four systems of sea swells. I am learning new terminology used on the ship. I have already explained the port side and starboard side. Swells are huge sea waves (opposite to currents) caused by the Earth’s magnetic force. There is constant rolling or pitching going on since morning. Right now at 10:30 pm when I am writing this mail, the rolling and pitching have suddenly increased. The water bottle has fallen on the floor. I am sitting tentatively on the chair. I have put all my cameras etc in drawers which fortunately are well secured and should not open just like that. Though I am working on the laptop, yet I am keeping an eye on it too. I can hear the roar of the waves from my room. The nights have finally become dark, so I can not see anything outside. Number of people coming for meals has decreased a little bit. I am holding on so far, but if the rolling and pitching continues with increased intensity, I may bear its impact. The ship will try to navigate away from this swell and storm, but if it is too large, it will have no choice. At the eye of the storm, the impact is least.
Yesterday throughout the journey the passage was littered with icebergs of all shapes and sizes, some upto 1 km long. On our return journey, we shall see much larger icebergs. Today, however, we are in the ice free zone. The icebergs have suddenly disappeared. Some solitary ones are seen at far distance.
By Sudhir Khandelwal at February 20, 2008