It is activity time at the Maitri. The first batch of the 26th Indian Antarctic Expedition is getting ready to leave for India on the 6th February, 2008. It's a batch of 10 people from the Corps of Engineers and Corps of Electronic and Mechanical Equipment of the Indian Army. They had come to Antarctica in November, 2006 by air all the way from Goa. They looked after the logistics of the station, namely, maintaining all the snow vehicles and organizing convoys to bring supplies from the sea coast (ice shelf) about 120 km from Maitri, looking after generators, boiler, water and electricity supply, sewage, and all maintenance jobs. The transfer of charge (jobs and responsibilities) has been completed. The inventories have been verified and papers signed. Books and music and film CDs and DVDs are being returned. The polar wears are being deposited back. Coordinates (emails, addresses, telephone numbers) are being exchanged. Last minute photographic sessions are taking place. The telecommunication room operator is having a busy time because these members are now exhausting their unused quota of telephony minutes. The wintering members of the expedition get a free allowance of 20 minutes of telephony time per month. Keeping the traditions of the Indian Army intact in Antarctica also, they have given an exemplary account of their sincerity, hard work, dedication and devotion to their duty during their stay at Maitri. Sadly, the Indian Army is withdrawing from deputing its personnel from Antarctic expeditions for the time being. Hence for the 27th Indian Antarctic Expedition there are no Army personnel; however, retired persons from the above two Corps of the Indian Army have been recruited for the job. This arrangement will continue in future if found satisfactory.
These members will leave for Cape Town from the Novo airbase by IL-76 and after a night's halt there, will board Mumbai flight from Johannesburg. They will be received by the Army Chief at the Army Headquarters, Delhi. As a reward for their work in Antarctic expedition, they will get a choice posting of three years. Invariably and understandably, they opt for a posting in home towns. 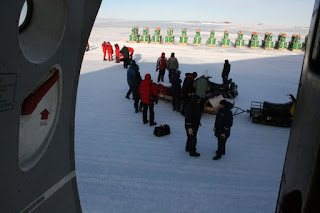 This evening our film club at Dooda Beta with limited and exclusive membership screened 'Dhamaal'. After some time I realized it was remake of 'It's a mad, mad, mad, mad world'. Quite silly movie, you could enjoy it only in a setting like Dooda Beta.
By Sudhir Khandelwal at February 03, 2008

Hello Sudhir
Its a wonderful account of life and times at Maitri, Indian Station at Antarctic.I started reading your blog and seeing pictures quite sometime ago, referred to here by vivek at vivekspace dot com.

It is really exceptional, the way you keep your online diary without causing any offense to anyone.Your training as psychiatrist shows up.
I would like to send a mail and would like you to deliver a lecture to students at Pondicherry when you return and be free for some tome to visit us.