Some Facts on M.V. Emerald Sea 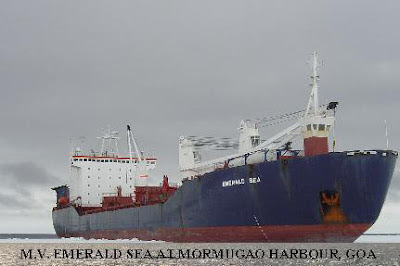 I got up much better this morning having slept better and getting accustomed to the ship movements. This morning too, the wind speed had remained near 40 knots, considered moderately high, causing lot of currents in the sea and making the ship pitch. I have remained much comfortable.
I gave a big load of laundry for wash to the stewardess against the advice of others. They have complained about their garments getting discolored in the heavy duty washing machine. After trying once and having suffered, they now wash their own clothes in the washing machines meant for the guests. But then, there are no fully automatic washing machines in the wash room meant for the guests. It means to handle three stage operation of washing, rinsing and drying. After being used to the full automatic machine I do not want to spend so much time on three machines. So I am ready to take the risk. In any case, most of my garments are the ones that I use on my treks etc. They have remained faithful to me all these years, so no worries. The white undergarments, even if they get colored, will be under the garments. I have just collected my wash and all my clothes have come back unscathed.
We are moving from the coordinates of latitude 70 South and longitude 11 East to latlong of 69 South and 76 East. Both these coordinates determine position of any place and its time zone respectively. We are now traveling in the longitude of 20 East meaning thereby that we are moving ahead of GMT. The ship which was maintaining GMT so far, will now have time of GMT +1.
M.V. EMERALD SEA

Some basic facts about the ship:
The name of the ship is M.V. Emerald Sea. It sails under the flag of Liberia, and its port of registry is Monrovia, Liberia’s capital. Though it is a Greek ship, however, it is registered in Liberia to save on huge taxes. Liberia is a small poor country of Africa, but can boast of a large number of ships registered with it. Similarly, Panama in South America is also a tax haven for the shipping owners. Emerald Sea is registered as a General Cargo ship.
The ship was built in October, 1984 at Finland for the then USSR. After the division of USSR, it was acquired by a Greek company, Eastland Shipping Company. It is operated by Elmira Shipping and Trading S.A. Now it has a Captain from Greece, and one Ice Captain who is Russian. The Ice Captain is a technical person who commands the ship during its Antarctica voyage and stay. It has one Radio Officer who remains on duty from 8 am to 8 pm. The Navigation Room, also called Bridge, is managed round the clock in shifts by a team of two persons. Each team works for four hours and then gets a rest of 8 hours, so works for 8 hours in a day.
Thus, currently the ship has a Captain, an Ice Captain, one Ice Navigator, one Chief Officer, one Second Officer, and one Third Officer. There is one Radio Officer. The Chief Engineer is assisted by four engineers as First, Second, Third, and Fourth engineer. There is one Electric Engineer. The engineers responsible for day to day running of the engine and its maintenance are assisted by one Bosun (you may call him supervisor; he reports directly to the Chief Officer), four ABS (able seamen) and four auxiliaries, one fitter, one tuner, four oilers, one wiper, one cook and four stewards. Thus there is a work force of just 30 men and women. Other than the Captain, all the staff is Russian. In olden days, such a ship would command an all-men crew of hundreds.
The length of the ship is 177 m, breadth 25 m, and height from keel to the mast is 50 m. The weight of the ship is more than 18,000 ton and can carry a load of more than 19,000 ton; more than its own weight.
Emerald Sea is ‘A’ category ice class ship. During Antarctica summer it is, of course, in Antarctica. It has contract with India for three years till March this year.
Ice class ship is different from an ice-breaker. Ice class ship breaks the frozen ice on the sea (fast ice or pack ice) with its movement and weight. The ice breaker, on the other hand, has very powerful blades to cut the fast ice or pack ice.
In calm waters, it notches a speed up to 20 knots; however, in Antarctica with high wind and frequent pack ice and icebergs, its speed remains at 10 knots or below. Even at this low speed, the strong wind and currents make such a heavy ship roll (move side to side) and pitch (move up and down).
By Sudhir Khandelwal at February 19, 2008