Lord Ganesh Around the Universe 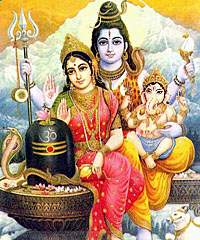 I recently finished reading the book, "Misadventure in a White Desert" by Patrick Woodhead. His team was the youngest and fastest to reach South Pole in 45 days skiing 1100 km in formidable Antarctica interior. On reaching South Pole 90 degrees, he writes, "Just by taking a couple of paces, a person could walk round the world. They would cross every time zone on the planet, traverse every line of longitude. This was the end point, the place where everything converged." That reminded me the story of Lord Ganesha circumambulating the Universe.
We all know Lord Shiva and his consort Parvati have two sons, Karthik and Ganesha. Karthik is agile and powerful, and has a peacock to ride or fly on. Ganesha is obese and comical with a head of an elephant but very intelligent and full of wisdom. During those times too and inspite of being Gods' children they had a sibling rivalry between them. Once they fought over some issue and could not resolve it themselves. They approached their parents for deciding who the winner was. The parents suggested simple solution: to circumambulate the universe! Whosoever completes it first, would be the winner. Karthik, sure of his victory, immediately leaves on his peacock. Ganesha could not match Karthik when it comes to the power game, but he is wise and clever. He puts his both the parents on a spot, circumambulates around them saying that you only are my universe. He is declared the winner. Now, the question is, was Ganesha conversant with the principles of Geography and had he put his parents on the South Pole?
By Sudhir Khandelwal at February 13, 2008