Another Story on the Equator

This morning’s latitude and longitude are at 7 and 51 respectively. We should be crossing Equator tomorrow late night or early morning next day. Gradually more and more flying fish are being sighted, but I haven’t been able to capture any on the camera. From today, another bird, Heron, is also being sighted in greater number. This evening a number of them were resting on the front mast. I did not know heron (Hindi name: Bagula) is found on ocean also; I had considered it a fresh water bird. It is seen abundantly around lakes and ponds in India, of the size of pigeon, and appears white in flight, while sitting totally motionless on the edge of pond, waiting for fish, it appears light brown. It waits so patiently and motionlessly that the term ‘bagula bhagat’ originated since fish, even if sees it, considers it a harmless object. In 1970s, Devanand was making a movie ‘Bagula Bhagat’. When its time for release came in 1974, Indira Gandhi had given a socialist and populist slogan – garibi hatao to signify class struggle in Indian society. The producer of the film in a masterly stroke changed the name of the movie to ‘Amir–Garib’. It was a big hit of its time. It was an ordinary movie with no memorable song but the change of the name created the desired magic. Chitra and I saw it together after having lunch at Standard in CP.
Appending one more story on Equator.

The Amazons: the Story of Women Warriors

The islands ruled by women, with mountains of solid silver, where strangers were eaten almost raw after being hung out, upside down, to ripen in the sun, and where crayfish emerging from the surf were turned to stone as soon as they touched dry sand.
In Greek language, the word ‘Amazon’ means, she who is without a breast. 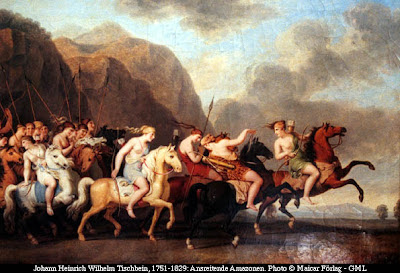 In April1542, Francisco de Orellana, the Spaniard from Spanish colony of Quito, led an expedition to find Land of Cinnamon, the most profitable spice those days. In the land of Paguana, after they sailed past the mouth of a broad and powerful tributary with water that ran black as ink, they landed at a village where they saw something absolutely worth seeing: a tree trunk some three yards across, upon which had been carved a city surrounded by walls, supported by two jaguars. The courteous natives explained that this was a sacred symbol dedicated to a race of women warriors to whom the village paid a tribute in the form of parrot feathers and palm fronds to use as roof thatching.
Subsequently, the Spaniards found themselves surrounded by canoes loaded with warriors. The Indio warriors, midway through the battle, called for help from the Amazons, their mistresses. A dozen of women warriors came to their assistance, fighting as if they were in command.
According to Carvajal, “These women are very white and tall, and have hair very long and braided and wound about the head, and they are very robust and go about naked, but with their privy parts covered, with their bows and arrows in their hands, each woman doing as much fighting as ten Indian men, and indeed there was one woman among those who shot an arrow a span deep into one of the brigantines, and others less deep, so that our brigantines soon looked like porcupines.”

The Amazons lived, without men, in some seventy villages. Their houses were made of stone, and they had furnishings of gold and silver, they worshipped idols made of gold and silver, they wore jewelry made of gold and silver, they ate off of dishes of gold and silver.
“These women would couple with men from time to time, and when the desire took them, they would assemble a large force and would set off to wage war against a powerful lord who resided not far away. They would carry off men and hold them captive in their own land as long as they wished, using them to satisfy their desires. When they found that they were pregnant, they would send them back to their villages without hurting them in any way. Later, when they gave birth, if the babies were male they would kill them, and send the bodies back to their fathers. If the babies were females, they reared them with great solemnity and taught them the art of war.” (Descubrimiento del Rio de la Amazons by Gasper de Carvajal)
Carvajal, a learned man, added that these women should not technically be called Amazons because, though they did fight with bows and arrows, they did not cut off a breast to use them more efficiently, “and in Greek language, the word ‘Amazon’ means, she who is without a breast.”
At the end of August, 1542, Orellana’s two brigantines reached the mouth of that infinite river that the Portuguese had previously called the Maranhao. From that day on, it would be known as Rio de las Amazonas, literally River of the Amazons – the Amazon River.

Bernard O’Brien, an Irish nobleman in the search of El Dorado in 1620,
claims to have met with a woman chieftain in a city on an island where there may have been gold. He insisted later that he had seen decisive proof that he had visited the legendary Amazons: during his stay, he had seen only women; there was not a man to be seen. Moreover, those women had “vestigial right breast, not much bigger than that of a man, artificially shrunken in order to shoot better with bow and arrow. Their left breasts, in contrast, were entirely normal, like the breasts of European women.” His document still remains in the files of General Archives of the Indies, in Seville where one can read an account of an Irishman who lived among the mythical cunantensecuima, the “women without husbands”, as the natives called them.

This merging of the legend of the Amazon women warriors and the city of El Dorado is a saga of fruitless trekking and quests after phantoms that marked a full century of South American exploration.

Interesting Information.
Thanks for sharing it here