THE SEALS: MAMMALS ADAPTED FOR THE COLDEST CONTINENT

The Antarctic coast as well as pack ice of the Antarctic Ocean is home to five species of seals. Seals are mammals and do not have external ears. There are five species of seals found in Antarctica: Weddell, Ross, leopard, crab-eater and elephant seals. Though the seals spend most of their lives in water and collect their food from water, they are not entirely aquatic animals like whales. From the surface of water, they mostly collect planktons, fish, squids, and birds including penguins.
Weddell seals were the most common variety that I encountered in my sea voyage towards the Larsemann Hills lying mostly singly on the pack ice. They must be hunting penguins there as I saw many times marks of blood all over a piece of pack ice.
Seals appear clumsy and lazy on ice or land, but are extremely active and agile in water, swimming, diving, rolling, and turning with ease. In winter, they live below the frozen surface under water, and breathe through the holes. Males defend their breathing holes from other males but allow a small group of females to use such holes. Such groups of females then become members of a male’s harem. The pups are born in September and measure much as half of the mother’s length at 25 kg. Pup grows quickly on mother’s milk containing 60% fat and in 6 weeks weighs double of birth weight.
Killer whales and leopard seals are the main predators of seals. Despite their being agile swimmers, they do not have a chance against a pack of killer whales in the water. 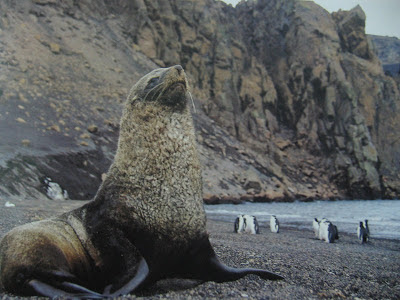 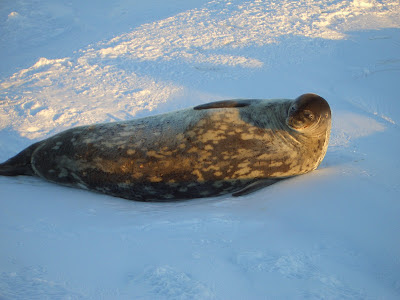 Penguins evolved as sea birds of a much broader temperate climate about 60 million years ago. As circumpolar regions grew colder, they spread and diversified. Their adaptation for cold is simple. Dense overall plumage, each feather overlapping its neighbours combines with an underbelt of woolly down to keep out cold air, wind and water. Thick layer of fat provides additional insulation. Emperor and Adelie penguins have slightly longer plumage for their size, with shorter extremities, flippers, legs and head to prevent heat loss. Penguins are superb swimmers. Their feet and tail combine to form a rudder, and flippers become powerful propellers on either side. Most species feed on krill (shrimp like creatures). EMPEROR PENGUINS The largest of penguins reach a height of 1 meter. The adult weighs upto 30 kg. Emperors are truly Antarctican of all birds. It is characterized by black cap, blue grey neck with ear patches brilliant orange. Breast is lemon yellow and feet are black. These penguins can dive upto 250 meters and are the fastest of swimmers among all penguins reaching 40 kmph. Only leopard seal can match that speed to which emperor penguins can become its prey. There are only about two dozens colonies scattered around the continent with a population of 250,000 breeding birds.Emperors assemble early autumn in scattered bays around the coast to breed. They breed from late March to early May in colonies in the shelter of icebergs and coastal ice cliffs. They do not build any nest. The female lays single egg which is held by the male on its feet. Incubation lasts for 60 days.The male remains on the ice incubating a single egg through the winter while the female returns to the sea. ADELIE PENGUINS Adelie penguins are about 70 cm and weigh only 5.5 kg. They spend their winters on pack ice where temperature is higher than the land. Early spring they return to South and head towards their colonies of previous years (rookery) navigating through the Sun. Males arrive first in late October, where they return to their previous nests and refurbish it. Females arrive a few days later; after joining their mates of previous years they help to rebuild and defend their pebble nests. The female lays two eggs in the first or second week of November, and return to the sea for 8-15 days leaving males to incubate. Separated from the sea and food, males have already starved for 2-3 weeks during the nest building and courtship. A further spell without food during the first few weeks of incubation watch in biting cold of spring takes them to the physiological limits set by fat reserve. By the time female returns, the male has already lost half of its weight. By mid-November, the sea ice is usually dispersing and food is available closer to the colonies. For next 3-4 weeks of incubation, the parents alternate at intervals of 2-3 days bringing back fish and planktons. Often it is not possible for the parents to bring enough food for both the chicks. If they divide food equally between both the chicks, none will survive. The parents select the chick which has a better chance of surviving the harsh climate of Antarctica. The parent makes the chick run after it for food. The chick which wins the race earns the food. The weakling gradually starves and dies through the process of natural selection. After brooding for 4 weeks, the parents return with their chicks to the sea.The penguins that we have seen around Maitri in January and February singly or in small groups of 2-5 are the ones that have failed to return to the sea. They will gradually become too weak starving and fall easy prey to the skua. 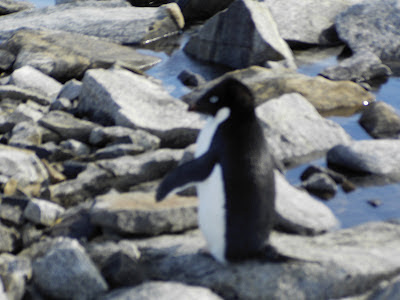 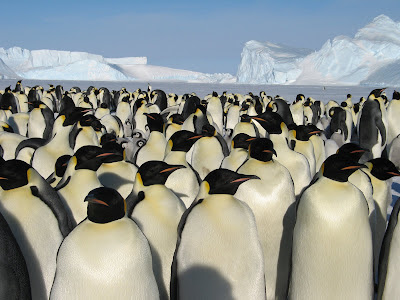 The largest of the Antarctic petrels are albatrosses. Albatrosses are large birds with wing spans of two meters in smaller species and upto 3 meters in larger ones. They are superbly insulated against the very low temperatures of Antarctica. Breeding mainly on the wind blown slopes of tussocks grasslands north of limits of pack ice, wandering albatrosses roam freely throughout the westerly winds, soaring and swooping in effortless gliding flight. Albatrosses feed mainly by scanning the water and gobbling fish, squids and planktons from the surface. They even enter penguin colonies and gobble up unwary chicks, and avidly clean up carcasses of whales and seals afloat and ashore. By breeding overland in springs and spending wintering over the sea, they make the best possible use of their uncompromising environment, avoiding the very low temperatures and thick snow of the land in winter, and using the brief summer and autumn to rear their slow growing chicks when the food is most plentiful in the sea. 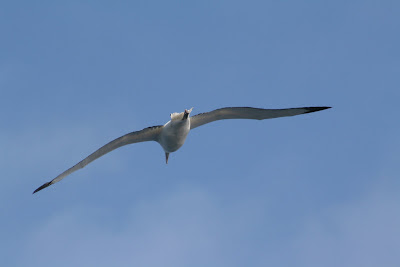 Albatross
By Sudhir Khandelwal at April 06, 2008